A Qing dynasty edict from the Yongzheng Emperor (1722-35)

Here is a recent unexpected find from an Australian furniture auction before Christmas:

The document written in both Chinese and Manchi script (derived from cursive Mongolian) commending Zhao Yi 趙嶧 of Youyu County in Shanxi as father, for raising and educating the famous scholar, poet and court official Zhao Zhongyuan, awarding Zhao Yi the title of 'Gentleman for Good Service' (修職郎) and 'Instructor' (教諭) for Youyu County and praising Li Shude 李淑德 (referred to in the text as Li Shufan 李淑範) as wife and mother awarding her the title of 'Child Nurturess of the 8th Rank' (八品孺人). Their son Zhao Zhongyuan 趙中元 (1702-1750) was 27 at the time as the edict was written in 1729 'the 10th day of the 1st month of the 7th year of the Yongzheng era'. The scroll may be the original of a later document issued by the Jiaqing Emperor in the collection of Yunju Temple near Beijing (2),


On this courtyard level we visited from right to left, the first pavilion is the Heritage Collection and first saw the cultural relics and the Qing Dynasty Jiaqing Emperor’s edict. This yellow damask edict part of a collection of edicts from Xidi village, Anhui, is written in Manchu and Chinese languages. It mainly describes the Jiaqing Emperor’s recognition and reward of Zhao Yi as the father of Zhao Zhongyuan, Qing government official of Shuoping Prefecture, Youyu County, Shanxi as an honest and loyal official and praises Zao Yi’s wife Madam Li as a virtuous wife and mother...

There are two large faded seal imprints in the centre of the scroll with the date written over them in Chinese and Manchu which read 'Yang Ping Zhi Du Gong Yin' 阳平治都功印. The seal was first created in the Eastern Han Dynasty by Zhao Daoling, regarded as the founder of Wudoumi Daoism and honored as 'Celestial Master Zhang'. At the ends are white woodblock stamps with double dragons with Chinese seal script characters and Manchu script between the dragons. The scroll is 150cm long and 30cm wide and written on finely woven imperial yellow silk with a paper lining behind. My thanks to Andrew West for his help with transcribing the Chinese characters, translation and for finding the reference to the Yunju Temple scroll. 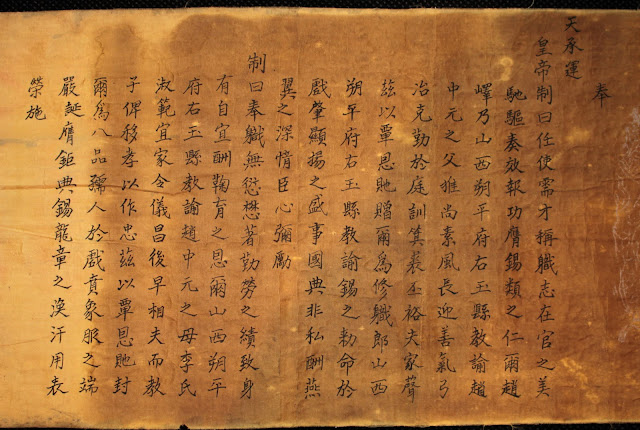 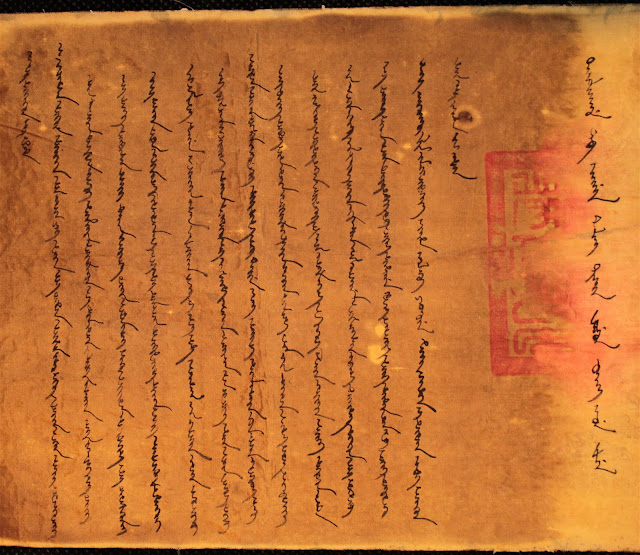 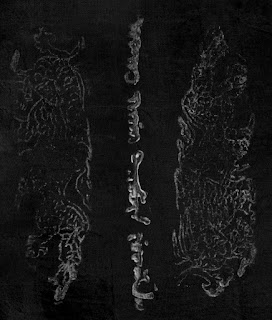 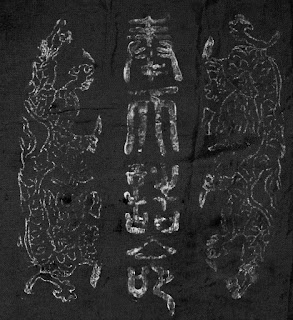 The following information provides a historical context for the scroll


In 1727 Daoist Celestial Master Zhang Xilin was called for an audience with the Yongzhen Emperor. In his retinue was the young Daoist priest Lou Jinyuan who he introduced to the Emperor. Lou Jinyuan made a very favourable impression on the Emperor and was retained by him at court. They grew close and Lou Jinyuan became a member of a small, select group of officials, scholars, Buddhists, Taoists and Confucians who met regularly at court to study Buddhist teachings, particularly Ch’an Buddhist sutras, with the Emperor. Lou Jinyuan, a highly respected Daoist, subsequently incorporated these Ch'an Buddhist teachings in to his own teachings. It seems that this close relationship, and perhaps also the service Lou Jinyuan provided by 'curing’ the Emperor of illness in 1730 through some form of exorcism (4), resulted in him being made a 4th rank court official and Abbot of The Hall of Imperial Peace and may have contributed to the Emperor financing the restoration of Daoist temples.

After the Yongzhen Emperor’s rule, Daoism became out of favour. Zhang Yulong, the successor to Zhang Xilin as Celestial Master was demoted as an official by the Qianlong Emperor, a follower of Gelugpa Tibetan Buddhism, and was excluded from court audiences. However, Lou Jinyuan who had adapted to both Buddhist and Confucian teachings survived the purge. It appears that the exclusion of the Celestial Master by the Qianlong Emperor in a decision probably influenced by Manchu court Lamas, became a contentious issue and a further cause for secret groups, including martial arts monastics and 'triads' opposing the Manchu dynasty and temples thought to be housing rebels were even destroyed by the Qianlong Emperor.


For a snapshot of Chinese history in the year the edict was written, 1729 was a very busy year for the Yongzheng Emperor who was a hands-on ruler. Here are some of issues he was personally involved with in that year: The Grand Council was established, a kind of ruling cabinet which collectively advised the Emperor; he made Shanxi an official province/county and 'with Lhasa and Kham under Qing control, in 1729 the Emperor began financial and military preparations for an ambitious campaign against the Zunghar empire, a campaign that would take several decades and another emperor to complete’(5) and in February 1729, with a budget of 28,482 taels of silver, he financed the major restoration of Youyu, a major military stronghold and base for the campaign. There was an edict against the 'Gathering of crowds through the spreading of evil rumours in Zezhou, Shanxi Province'. The Bureau of Instruction (Office of Music?) was renamed ’the Bureau of Harmonious Sounds' (Heshengshu) and the Emperor issued an edict in relation to hereditary court musicians living in Shanxi, whose profession was associated with prostitution and whose ancestors had sided against an earlier emperor, allowing them to pursue a 'more respectable' profession. The first edict against the sale and smoking of opium was issued, Suzhou textile workers went on strike for better wages and the Emperor was personally involved with important developments in ceramics production and tea growing. If this was just one year's work, it is hardly surprising that the Yongzheng Emperor is supposed to have died young from over work and exhaustion.

And finally an account of the Yongzheng Emperor and a martial arts master culminating in 1729:

Master Gan versus the Evil Emperor - the Sequel (6)

Emperor Yongzheng summoned Master Gan soon after he took the throne. Yongzheng still wanted to enlist Gan as a bodyguard and Master Gan could not refuse an imperial invite. Besides, he thought he could learn something about the inner circle of the palace for the Ming resistance. So he went, but he found the palace too well guarded for him to look around. The emperor looked at Gan's slight build with contempt and asked, "What skill do you have?" Master Gan said, "Your subject can be a light as a sparrow or as heavy as a stone." Yongzheng ordered Gan to demonstrate. Master Gan focused his qi and then leaped up to perch on a flower bush. Yongzheng was delighted and exclaimed, "How light he is!" Before the words left his lips, Gan jumped down and his legs sank into the tiled floor up to his knees. "Supernatural!" cheered the emperor and he immediately ordered that Master Gan be rewarded. Gan quickly found an excuse then escaped the palace.


Emperor Yongzheng never let go of Master Gan after that. In 1729, the seventh year of his reign, Yongzheng had Master Gan arrested by Qing officials. More than 100 others, many of who were also martial arts masters, were taken into custody in connection to a secret anti-Qing religious sect, led by the Monk Yi Nian. Like many such secret societies of China's turbulent history, Monk Yi Nian's followers espoused a doctrine of mysticism and martial arts with an undertone of rebellion. Such movements have always threatened the governments of China, so they are crushed quickly and mercilessly, even to this day.