In 2012 Matyó embroidery, traditionally practiced as a communal activity, was made a UNESCO Intangible Cultural World Heritage. See http://www.unesco.org/culture/ich/RL/00633 for more information on the Matyó.

The Matyó settled in the Mezőkövesd area of N. E. Hungary following Turkish invasions in their original homelands in Hungary and Slovakia. They established themselves as a distinct ethnic group in the late 1800s and legend says that they are descended from bodyguards of King Matthias, whose Renaissance court inspired their tradition of fine embroidered textiles. 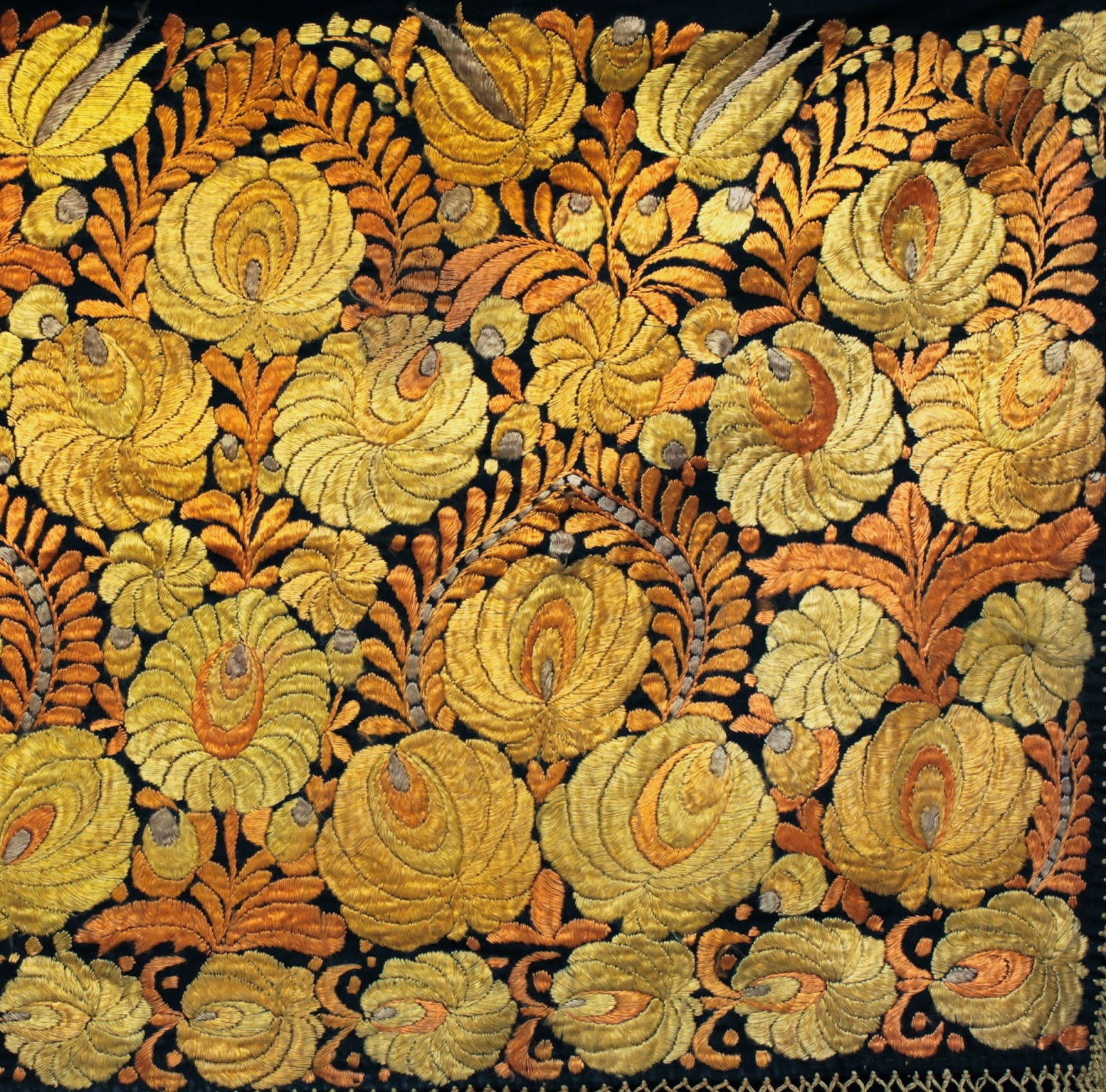 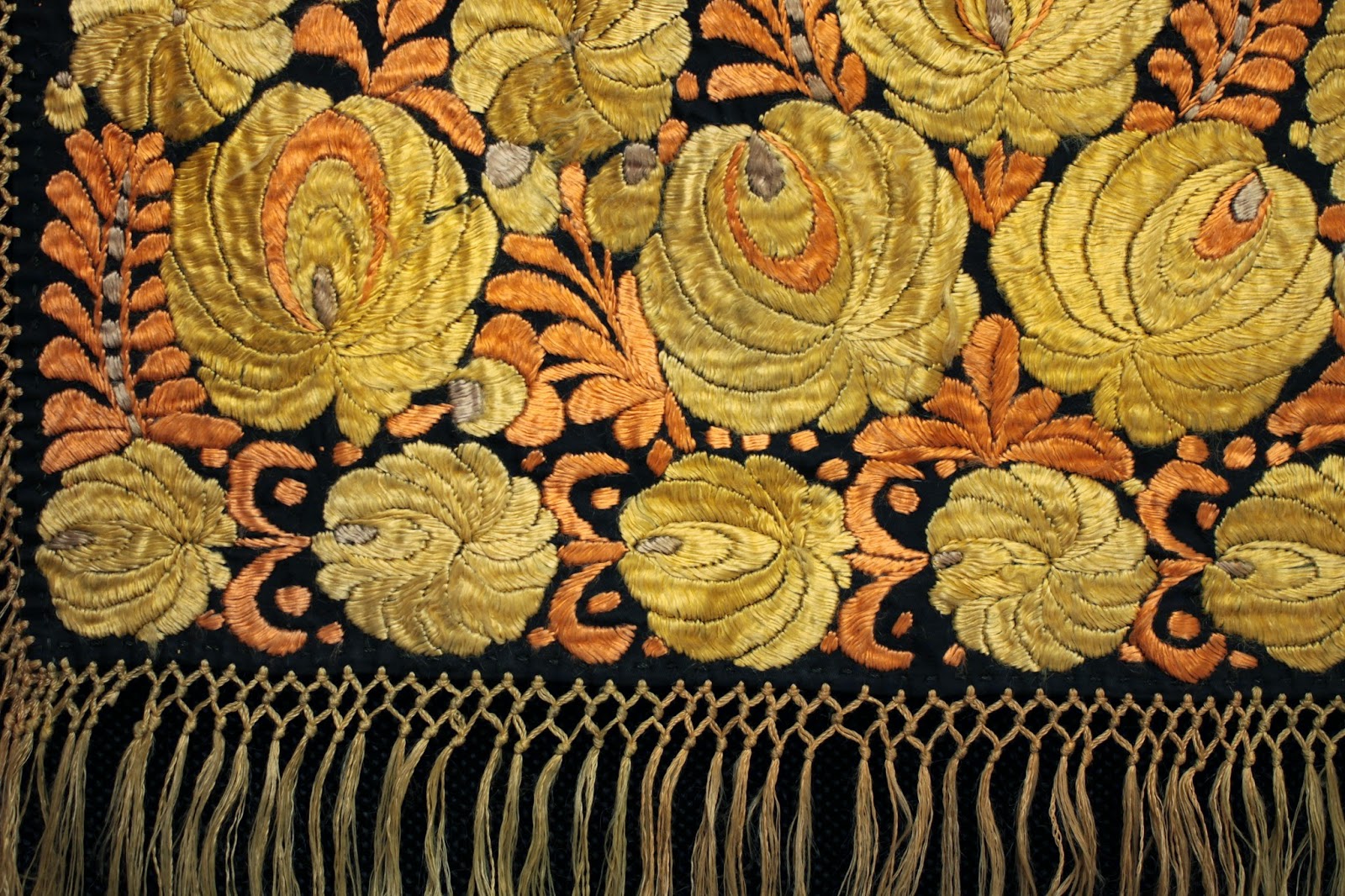 What is zincir? A Small Malatya kilim

Zincir technique on a small antique Anatolian kilim from Malatya


Kathi has just finished conserving the fringe of this small antique 'fragment' kilim (i.e. part of what was a larger kilim). The kilim is from the Malatya region of easter Anatolia in Turkey, probably from the village of Sinan, now under the Karakaya Dam, which submerged many ancient villages that were the homes of nomadic tribesmen with a wonderful weaving tradition. For an example of a fine antique heybe saddlebag from Sinan, see: http://www.kilim.ie/TRIBAL_RUGS_and_KILIMS/Pages/HEYBE_SADDLE_BAGS.html

The kilim below includes areas of metal bound thread which would originally have given it an added sparkle (3rd photo), uses white cotton for added contrast in the patterns and silk thread in the centre of the stars in the central bands.

The Turkish term 'zincir çekme' (pronounced zingir) describes the technique of retaining the fringe of a kilim (or carpet) by sewing a crochet type knot around each of the warp threads along the length of the rug. Kathi was taught the technique by Ibrahim Konukcu in Goreme, Cappadocia, a skilled repairer of kilims and rugs.

For more photos of the kilim, see: www.kilim.ie 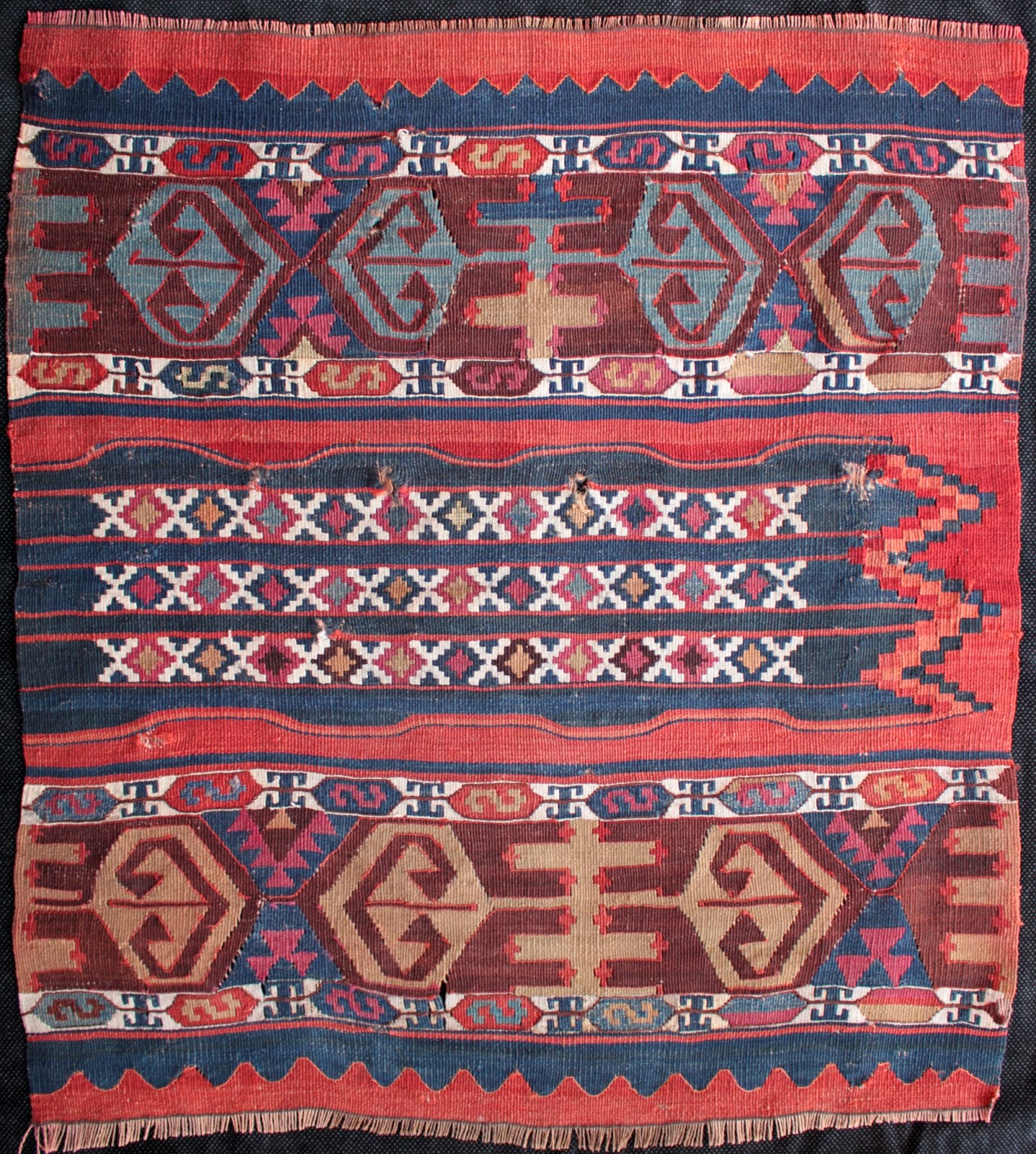 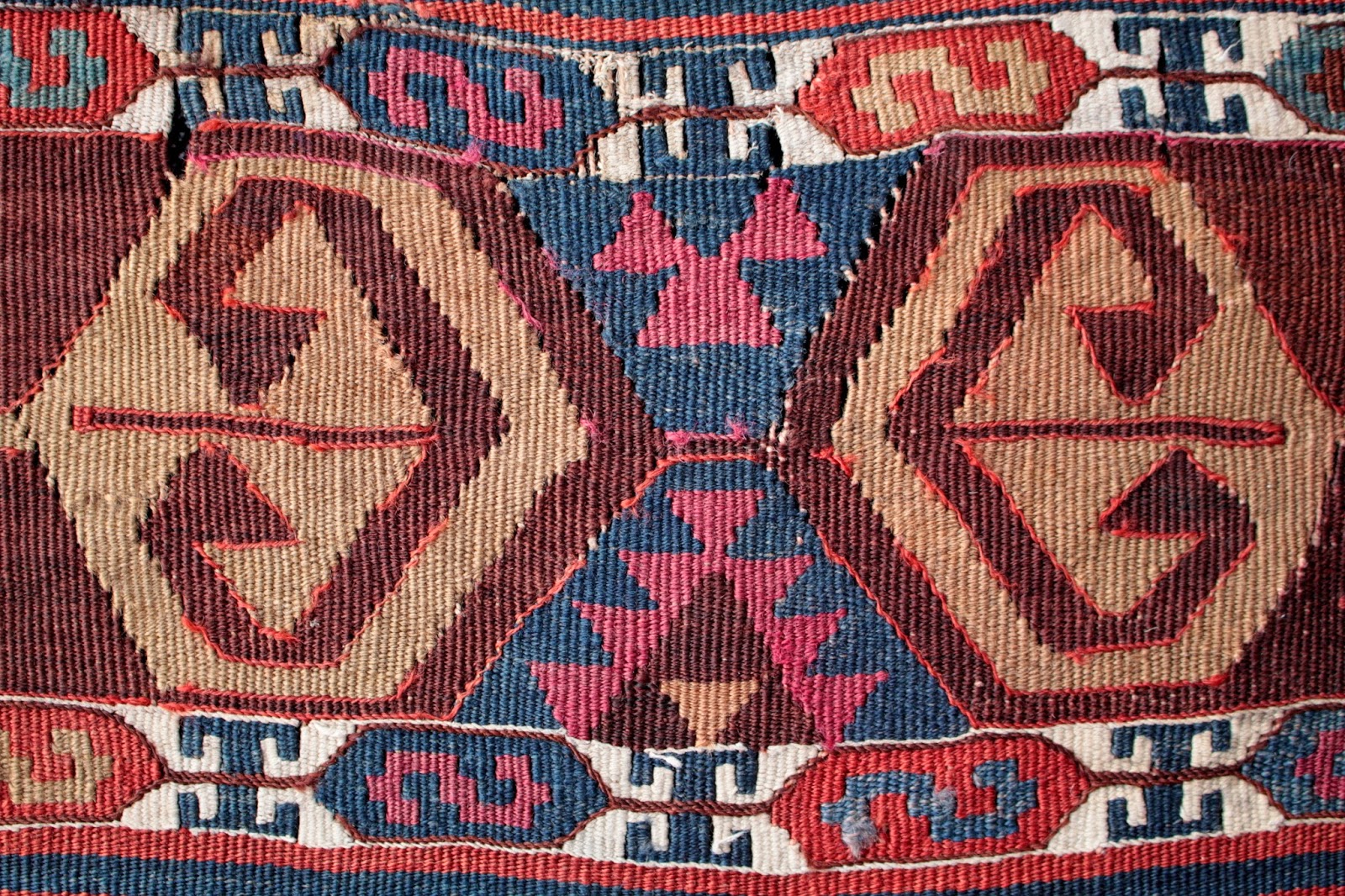 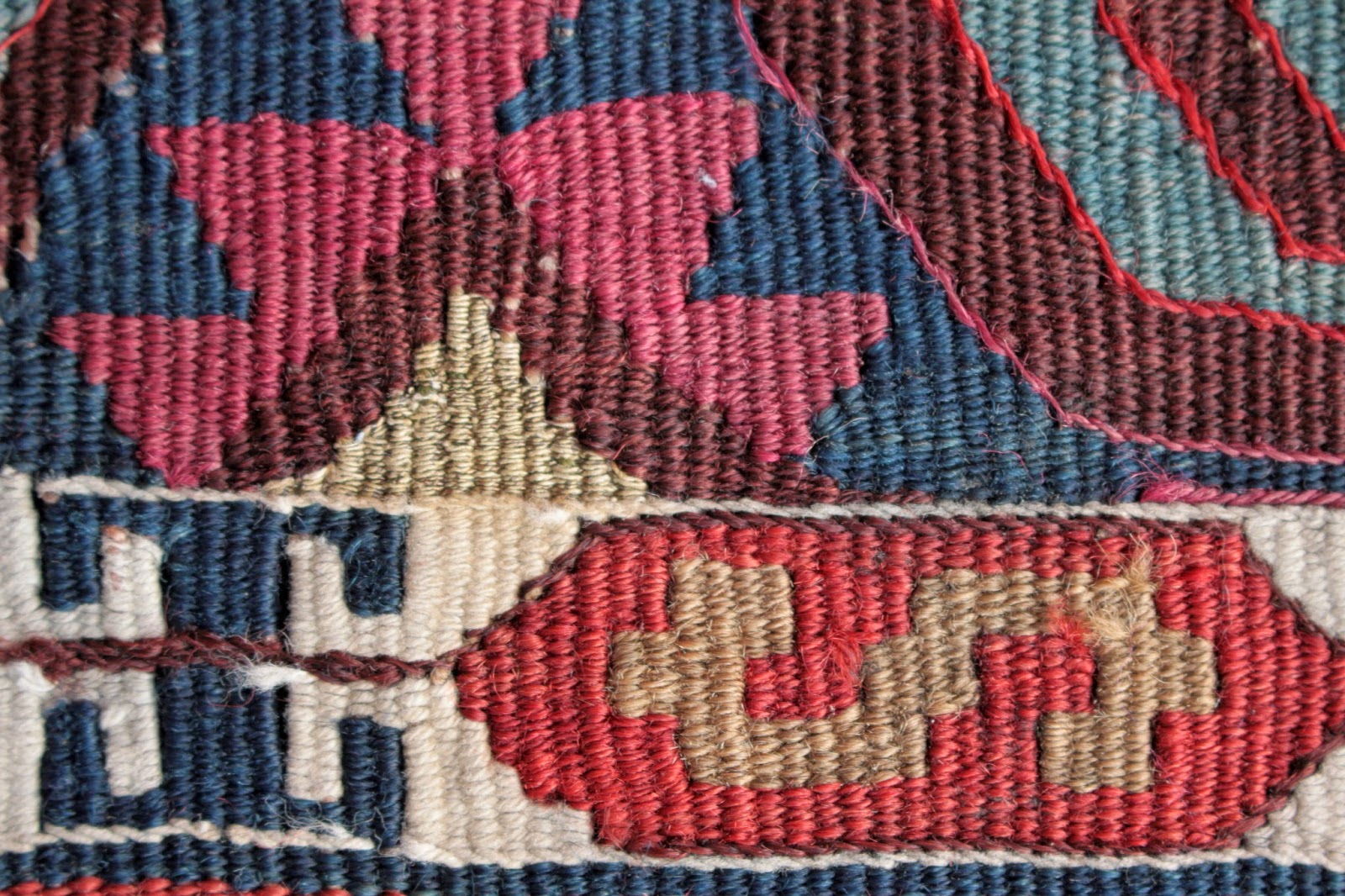 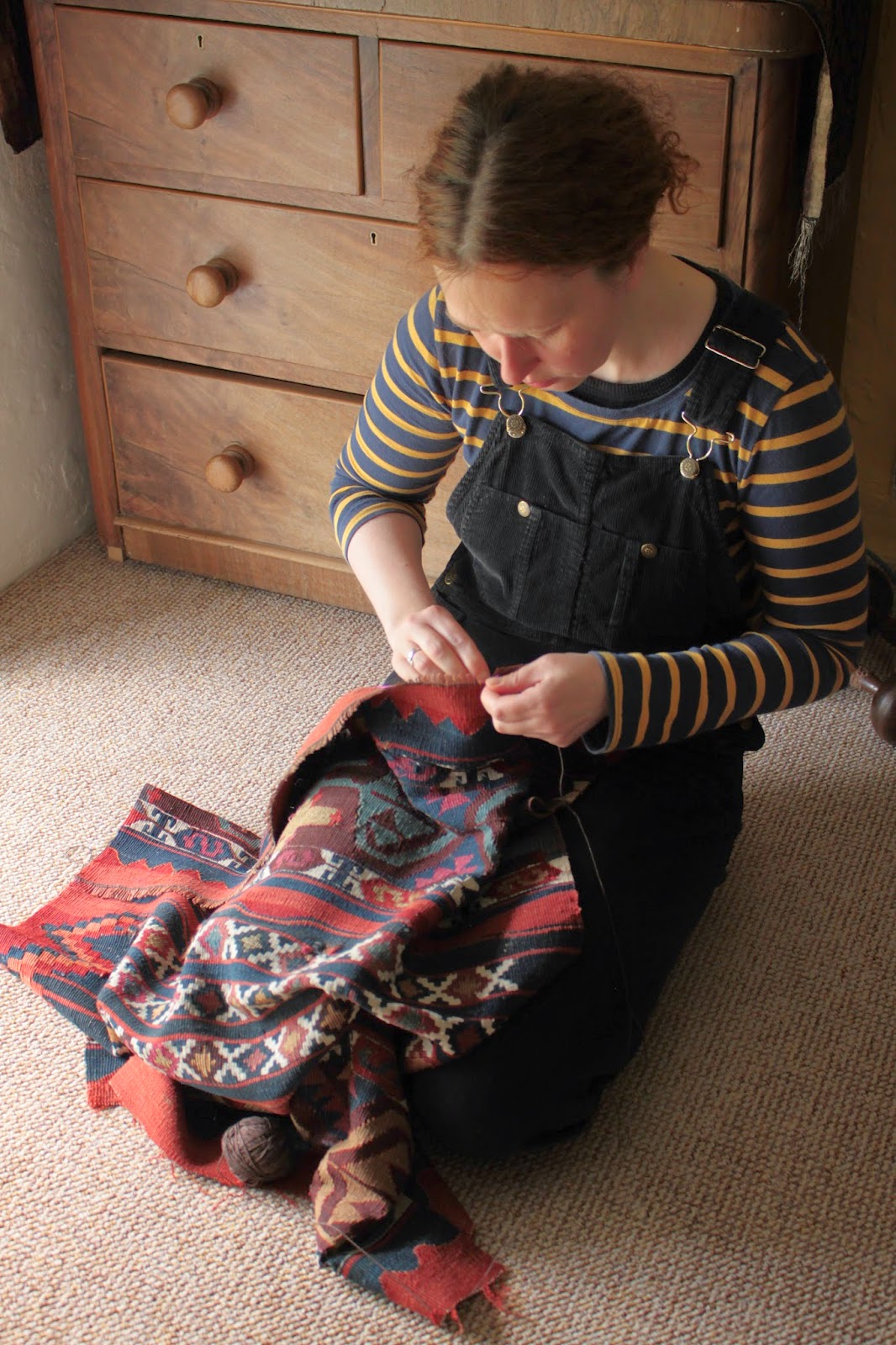 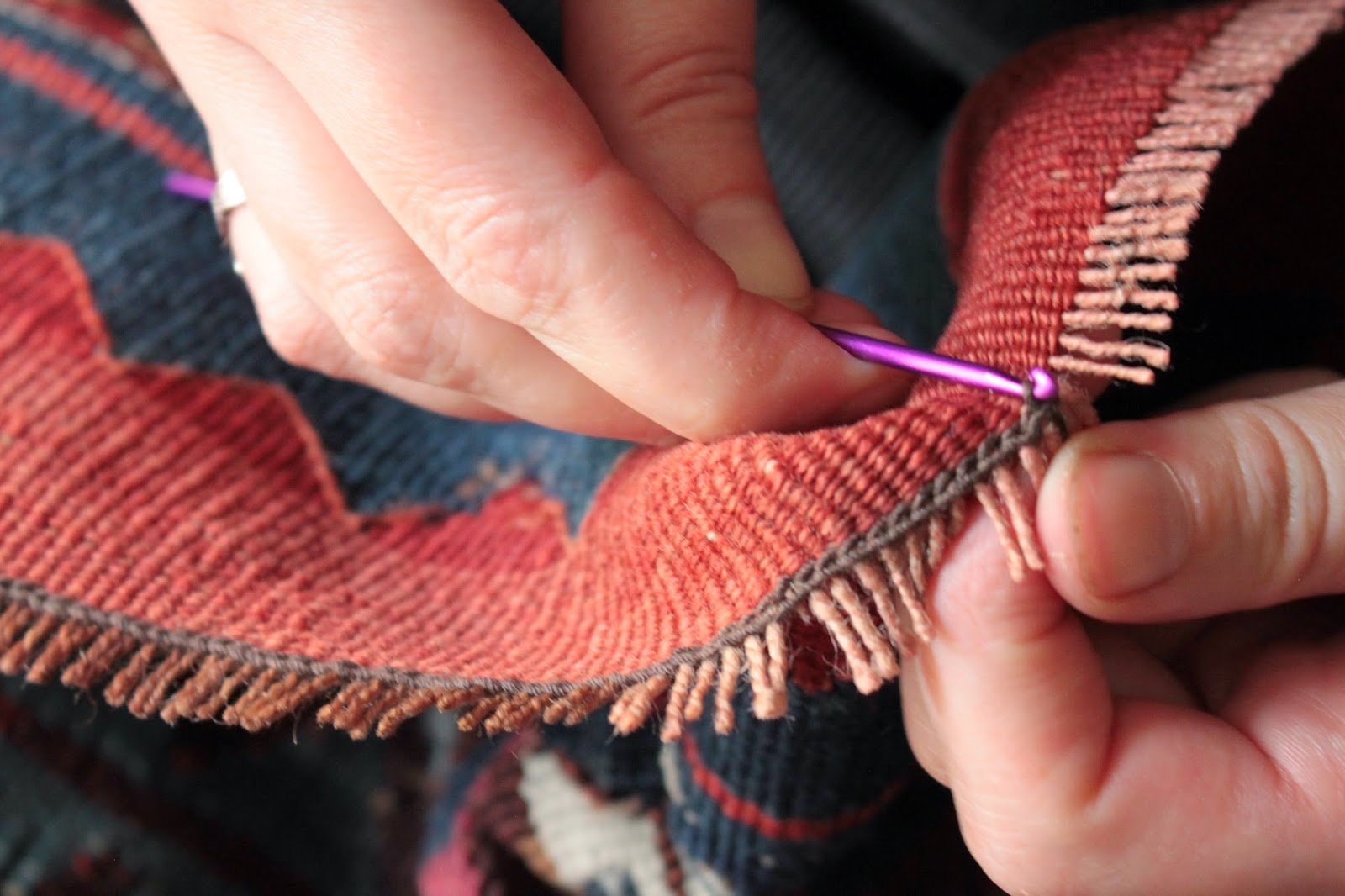 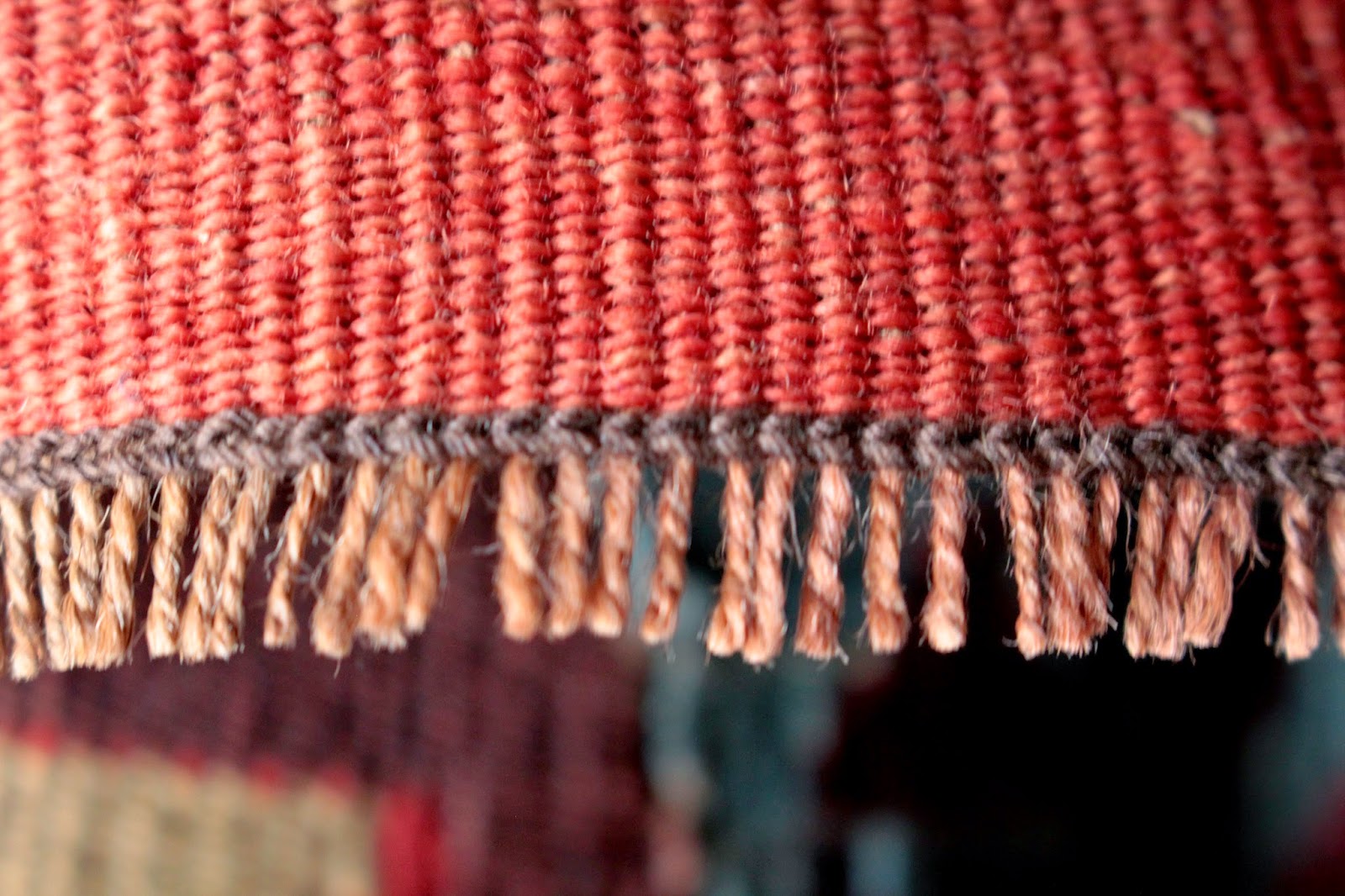 Rug of the day

Just arrived in West Cork, Ireland via Holland, where luckily for their antique Persian rugs they like to display them on tables. A finely knotted 19th century rug 162x136cm in size and in good original condition with no repairs and low pile consistent with its fine knotting and age. Made from wool on fine spun mountain sheep wool by the Shesh Boluk (or Shishbuluk) sub-tribe of the Qashqai (or Kashgai) nation with interesting tribal motifs; animals, Akstafa style birds, jewellery, trees, flowers.... The rug has an unusual inner border, perhaps an abstracted branch, leaf and flower design.

To see more details and photos of this rug, visit www.kilim.ie 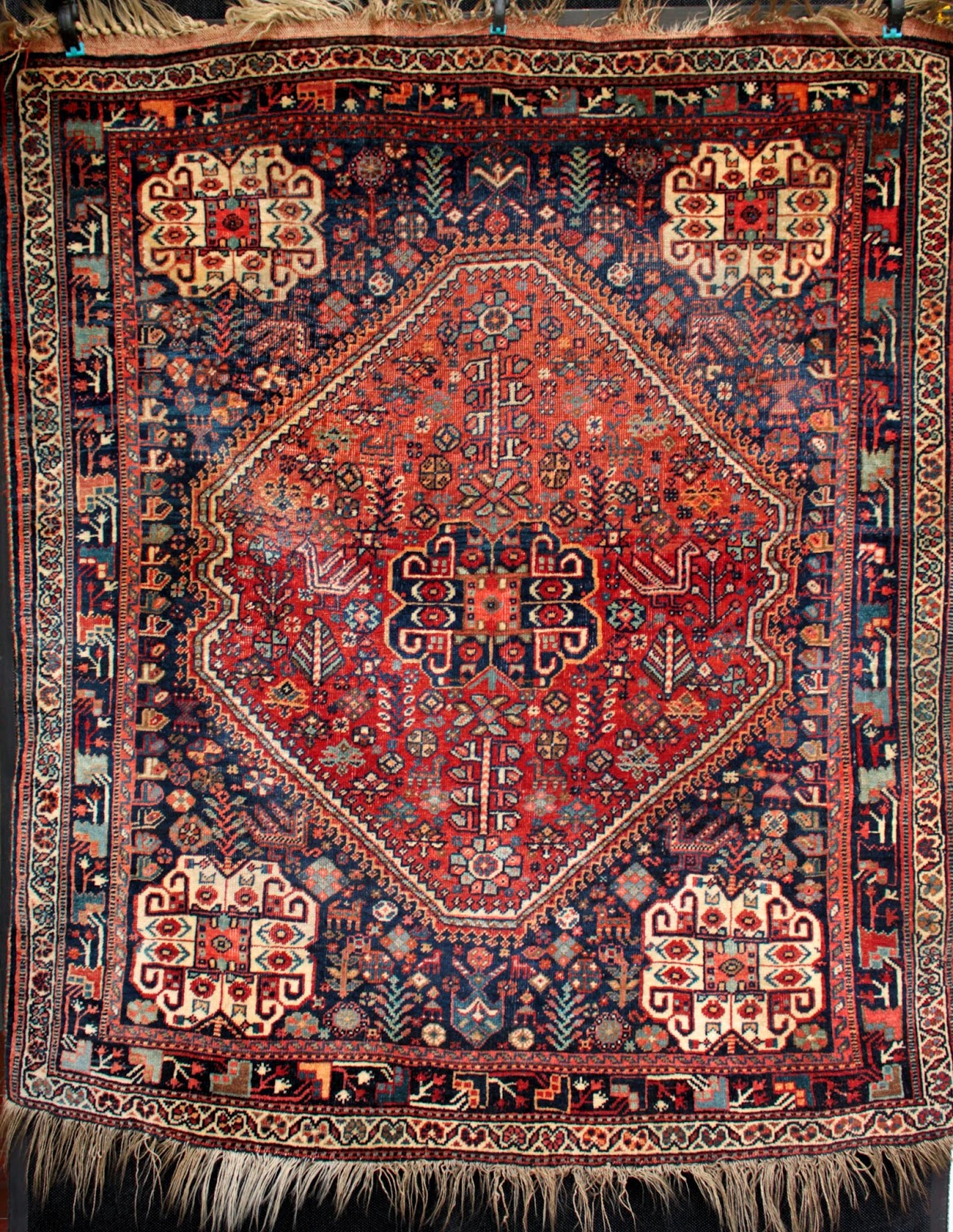 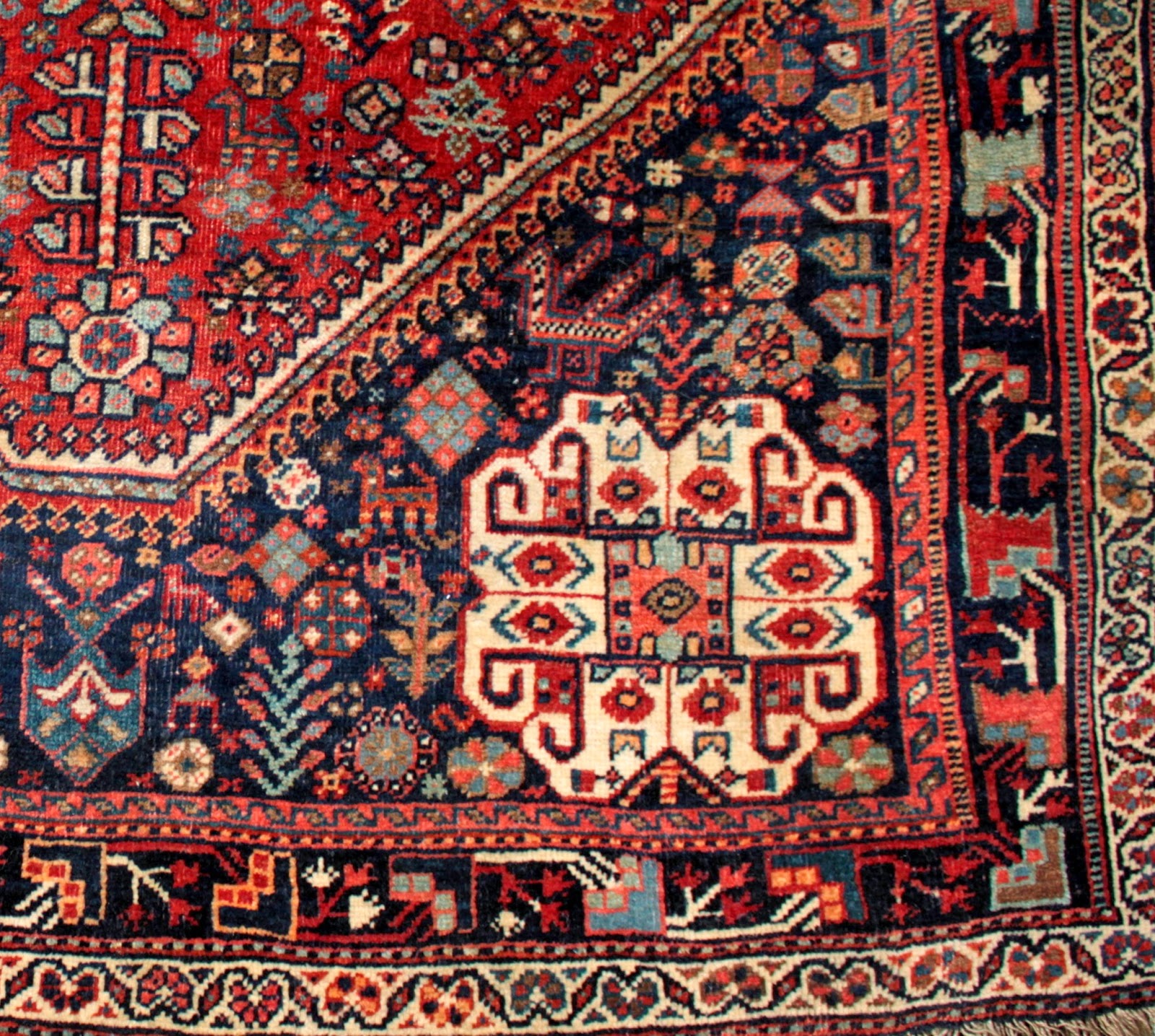 
This beautiful silk bag, which has a distinctly modern look, was in fact made in Provence in the early 1900s during the Art Deco period. The striped, kilim type silk fabric was produced in Gaziantep in south east Turkey in a tradition that was brought from Aleppo in Syria in the 1600s.

The bag is in perfect useable condition and the fabric, which is a silk weft on a cotton warp, is very strong. There is a little fading of the two outer panels that have been exposed to more light compared to the two inner folded panels, but I think this adds to the charm of the bag. It is 50cm from the top of the handles to the bottom of the tassel and the silk kilim bag itself is 22.5 cm long excluding the handles and tassels and 11cm wide.

To see more photos and details of this lovely bag, go to www.kilim.ie 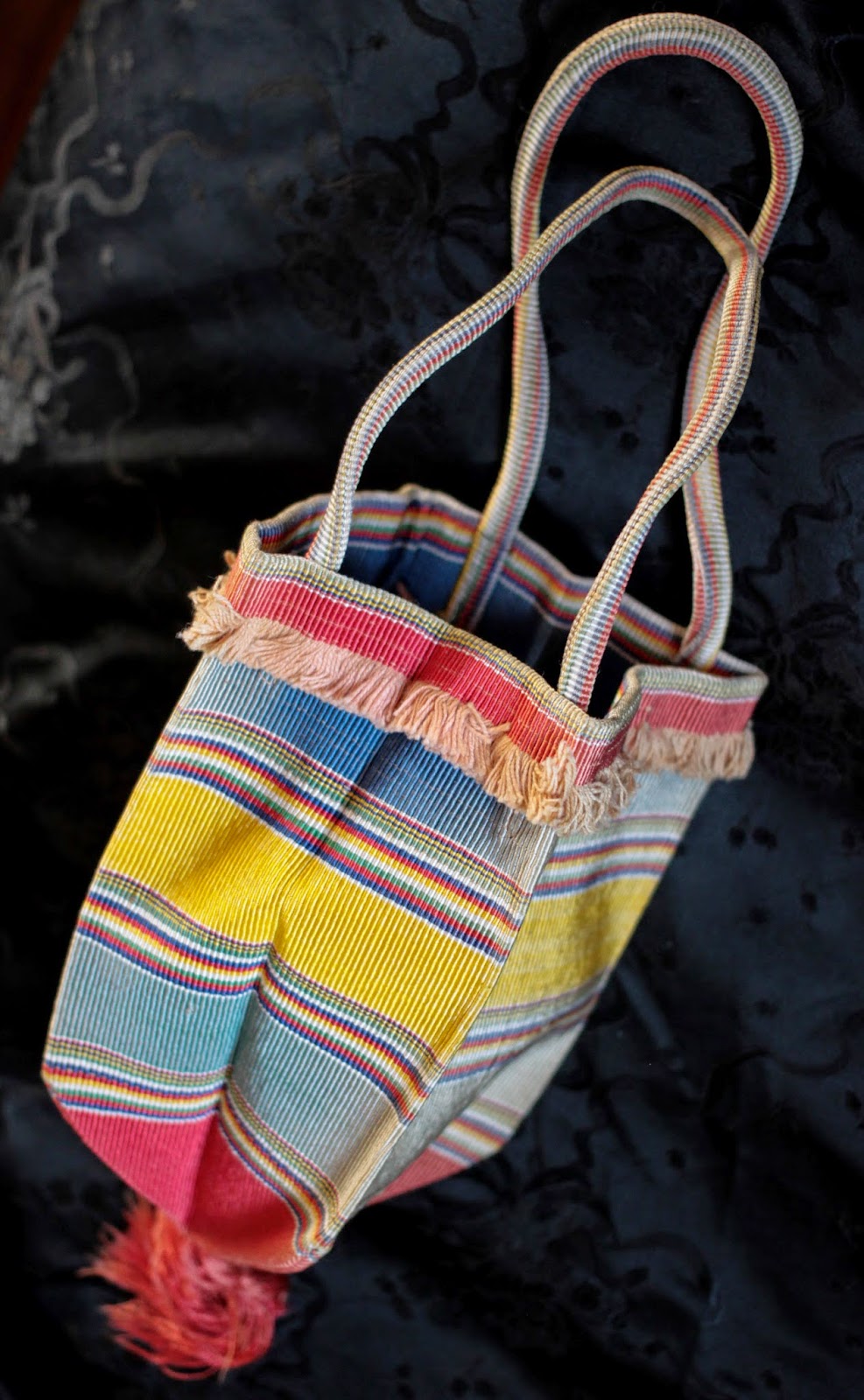 Kilim of the Day

Just arrived: Kilim of the Day


A simple but well drawn, dynamic Afghan Hazara kilim from the 1920s. There are various tribal groups in the Hazara region, which is in the Koh-i-Baba Mountains of central Afghanistan. kilims with this 'lightening' design are called Tartari in Afghanistan because of a connection between the Hazara tribe and Genghis Khan's army who were Tartars and from whom they are said to be descended.

This small Hazara kilim is woven with a wool warp on a mountain sheep wool foundation and is 150cm x 100cm.

To see more photos of this kilim, visit www.kilim.ie 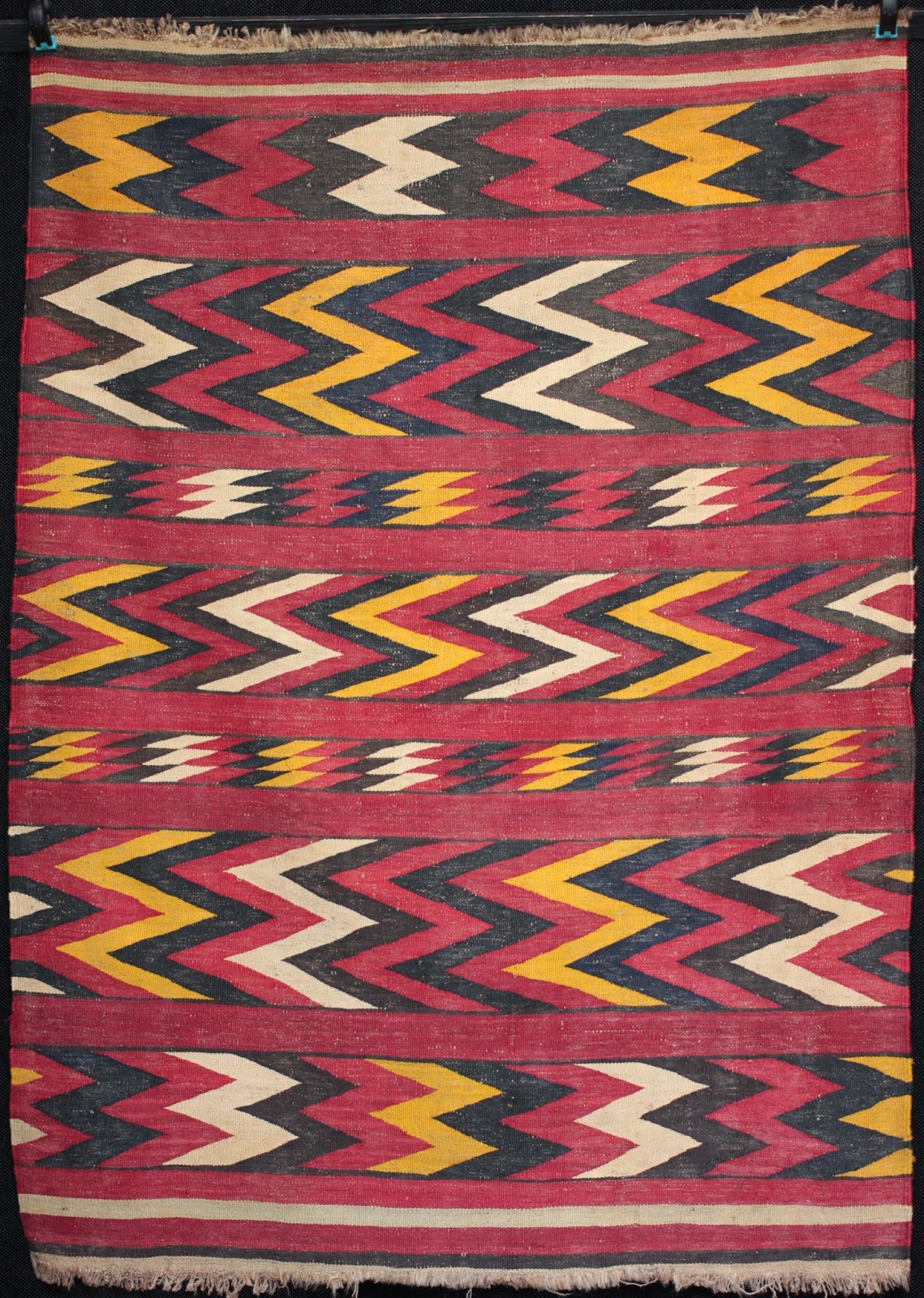 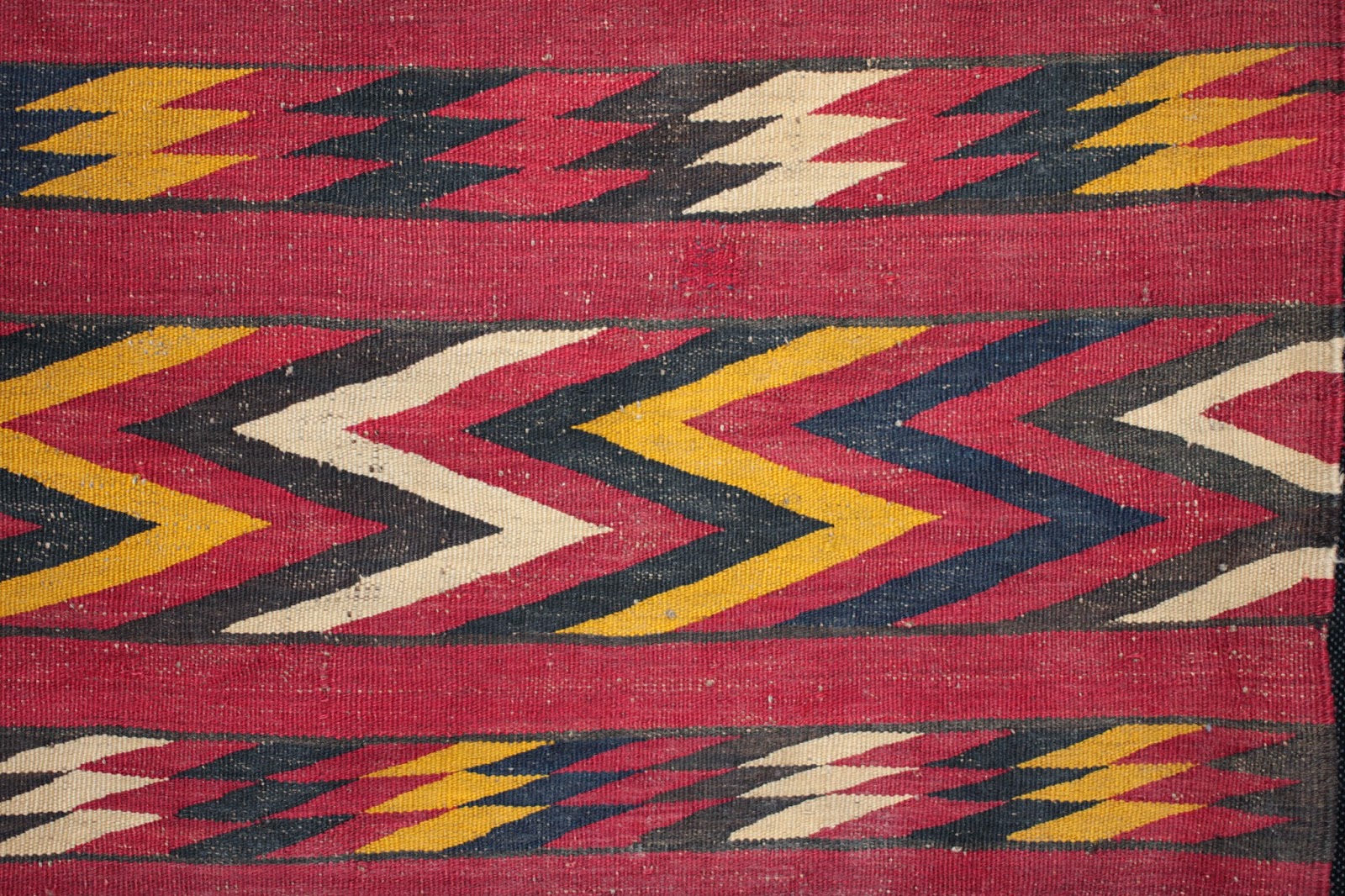 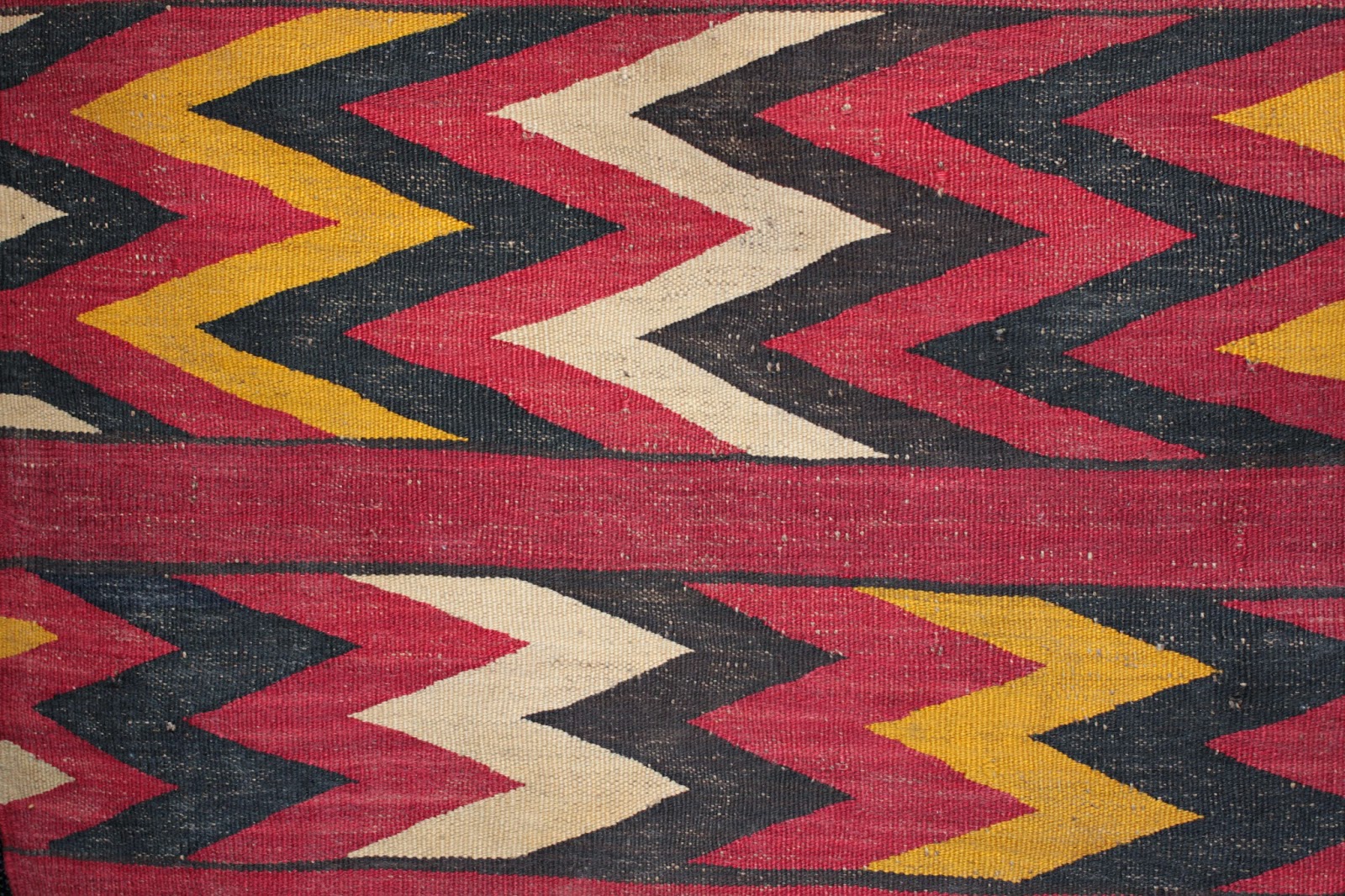 For more kilims see www.kilim.ie
Posted by Unknown at 11:26 No comments:

Anatolian kilims collected from Turkey in May

I have spent the last eight weeks photographing and writing up antique kilims I found during a lovely trip to Anatolia in May. Although it was much more of a kilim hunt than a holiday, we did also manage to have a few days rest by the sea near Bodrum and in Goreme, Cappadocia where Ibrahim who does my kilim repairs taught Kathi the ‘zingir’ technique for retaining the ends of kilims with a special crotchet knot over each warp thread.

Here is a selection of photos of the weavings I found. To see the rest, feel free to have a look at www.kilim.ie 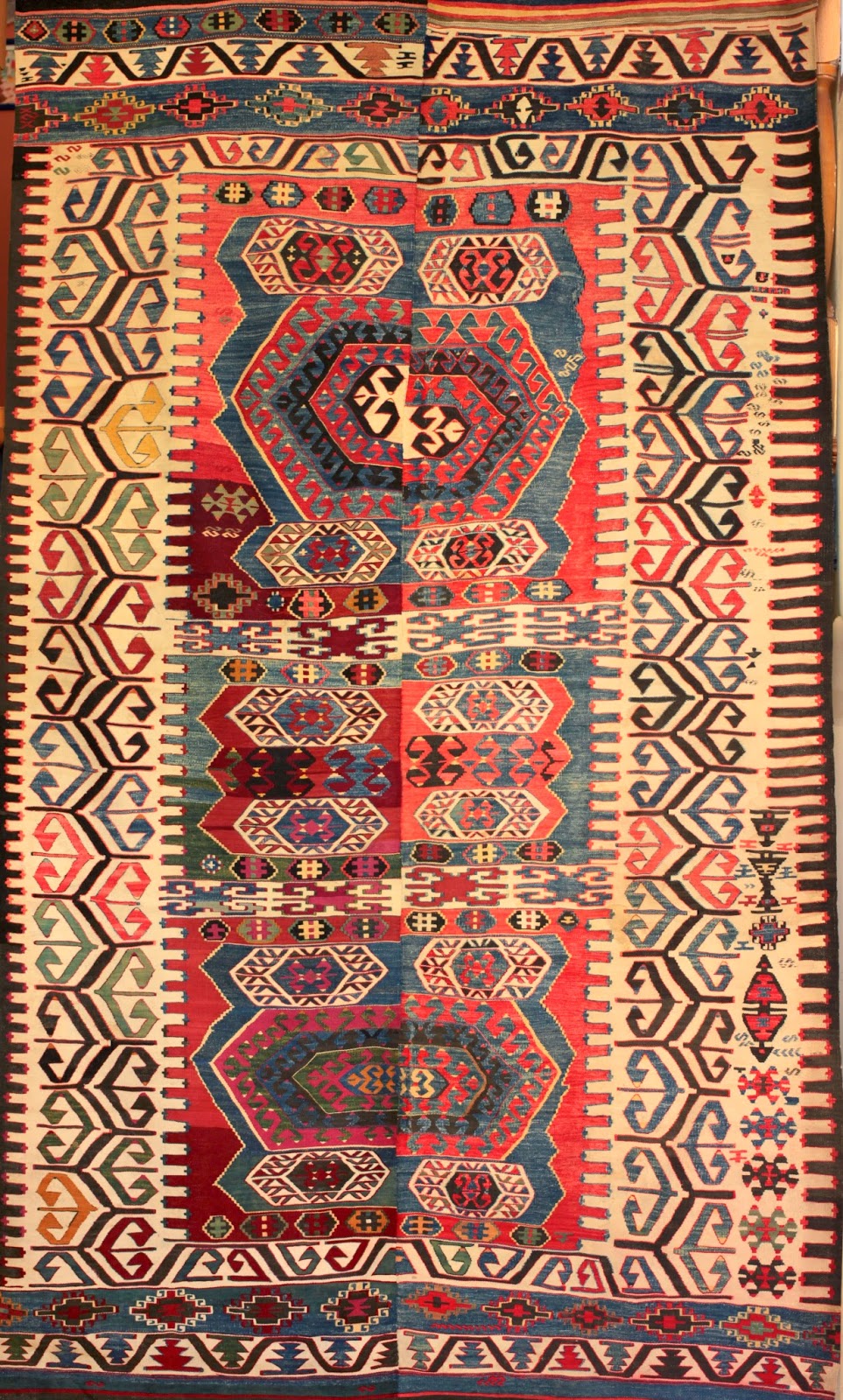 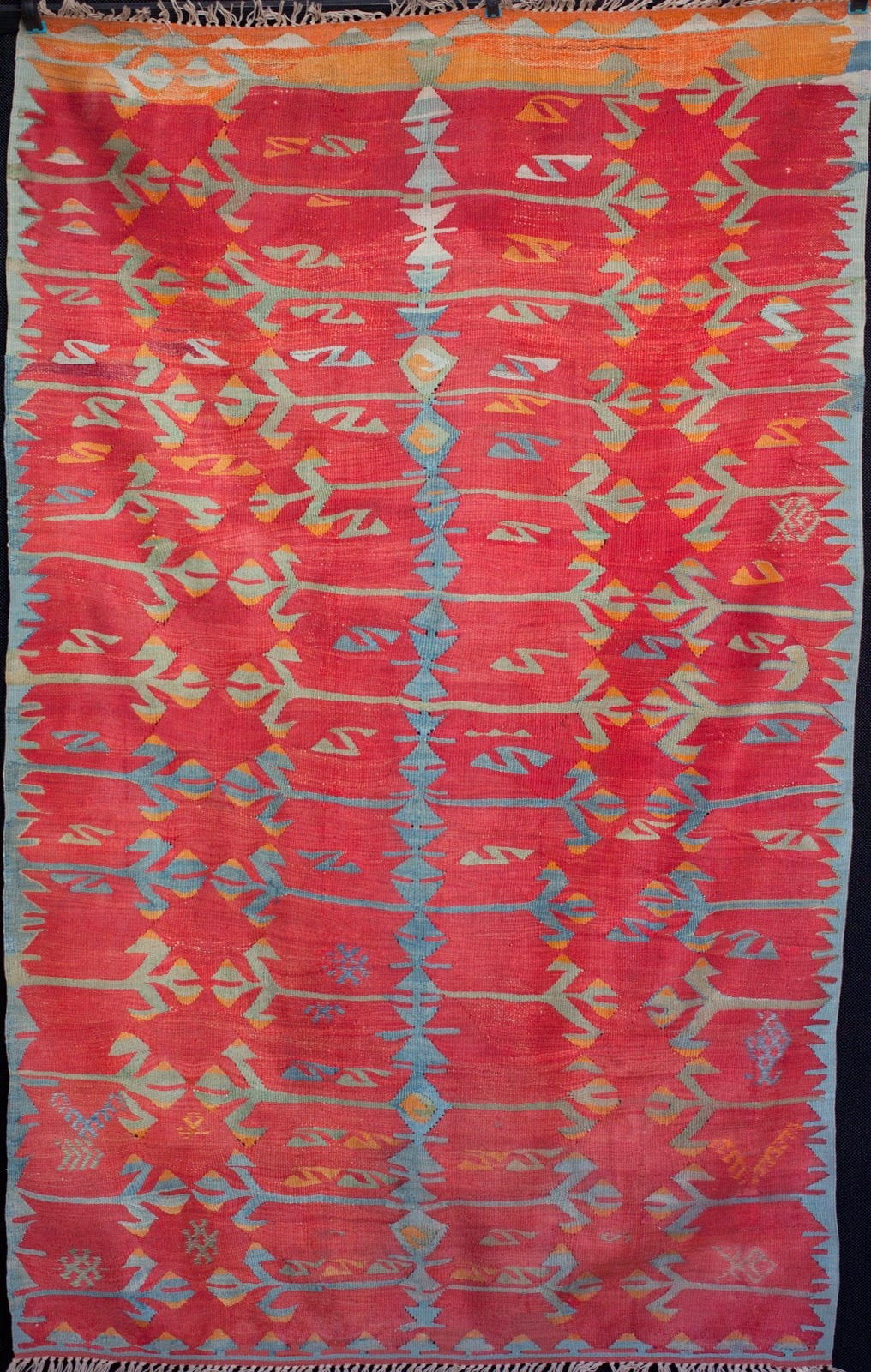 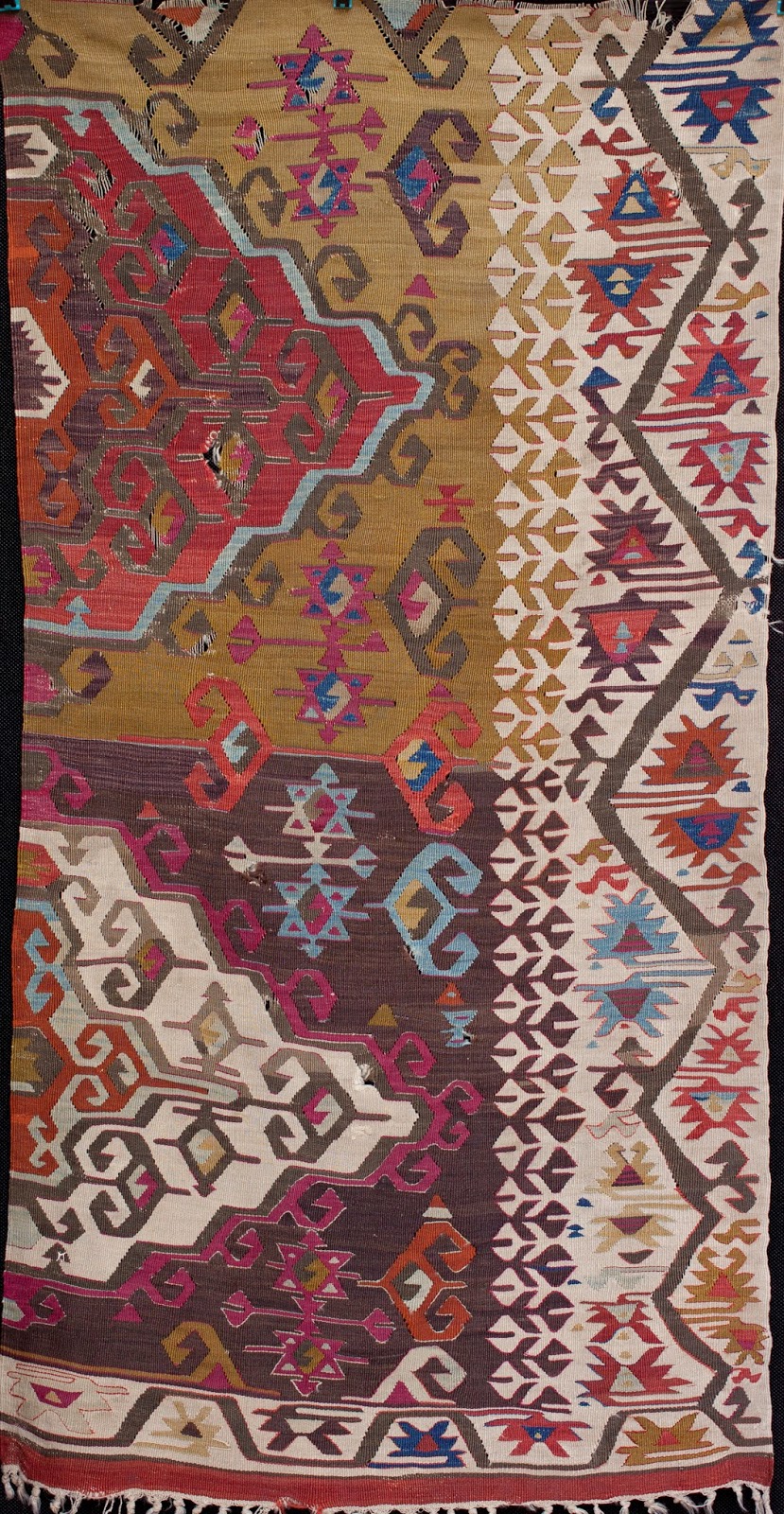 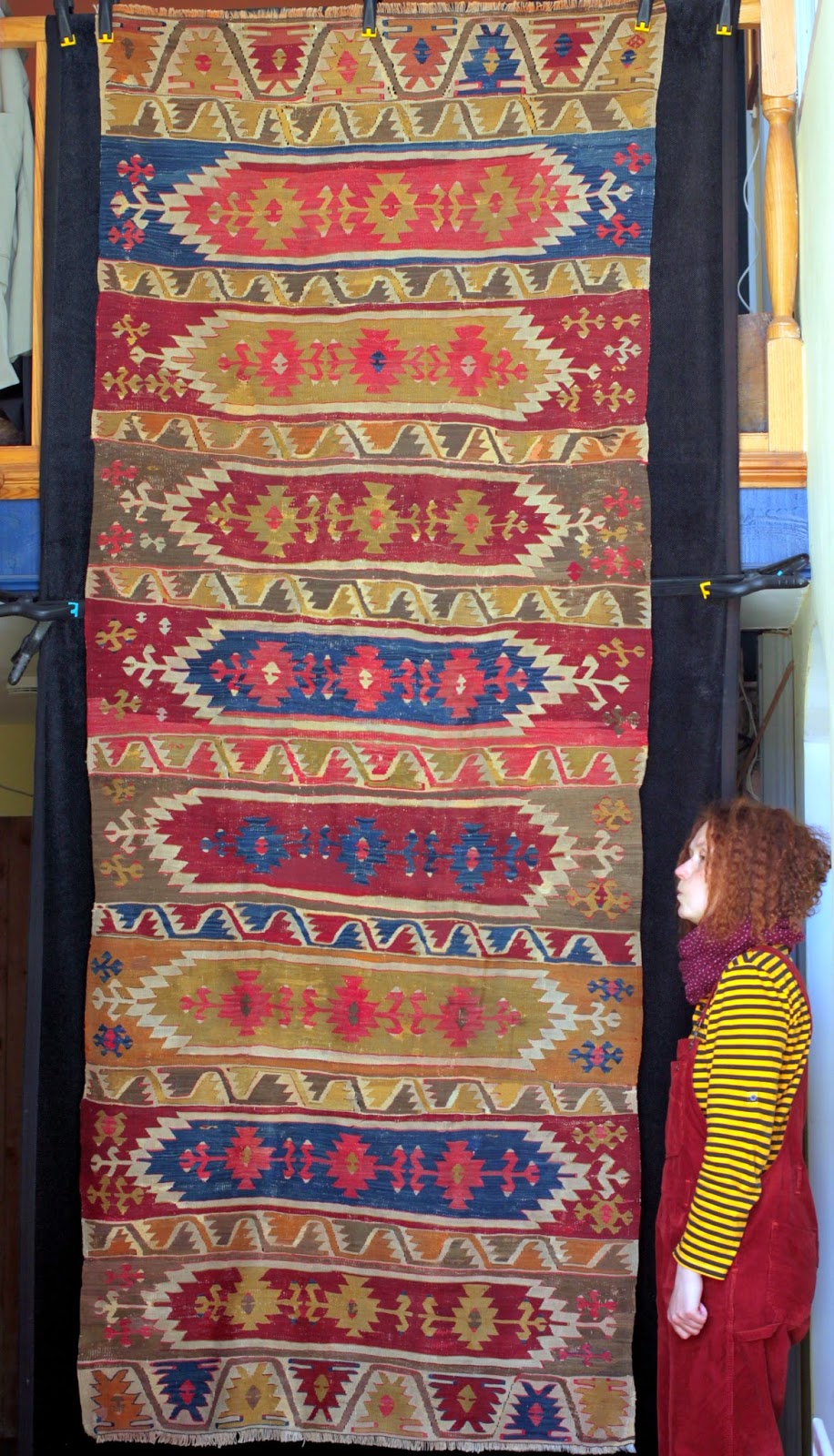 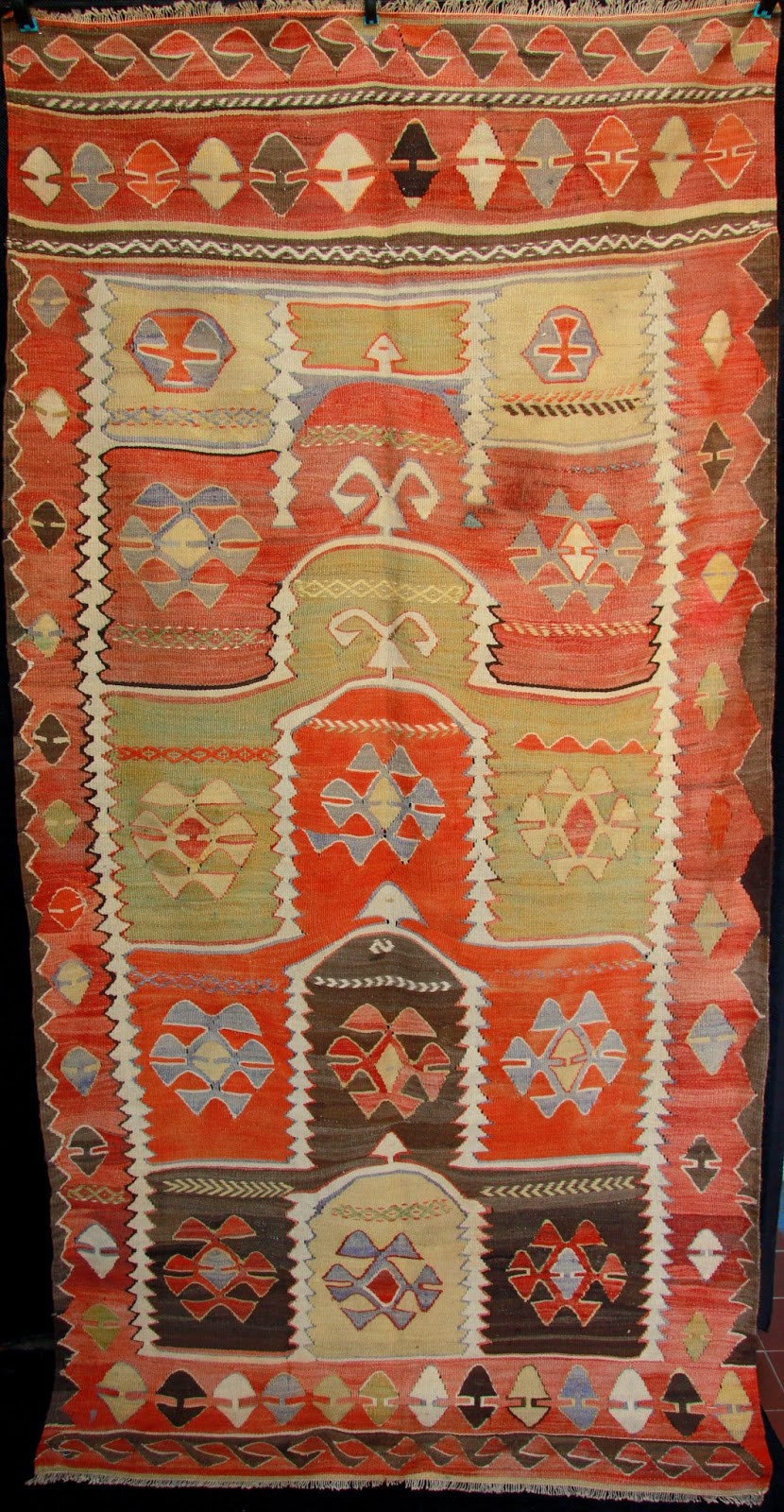 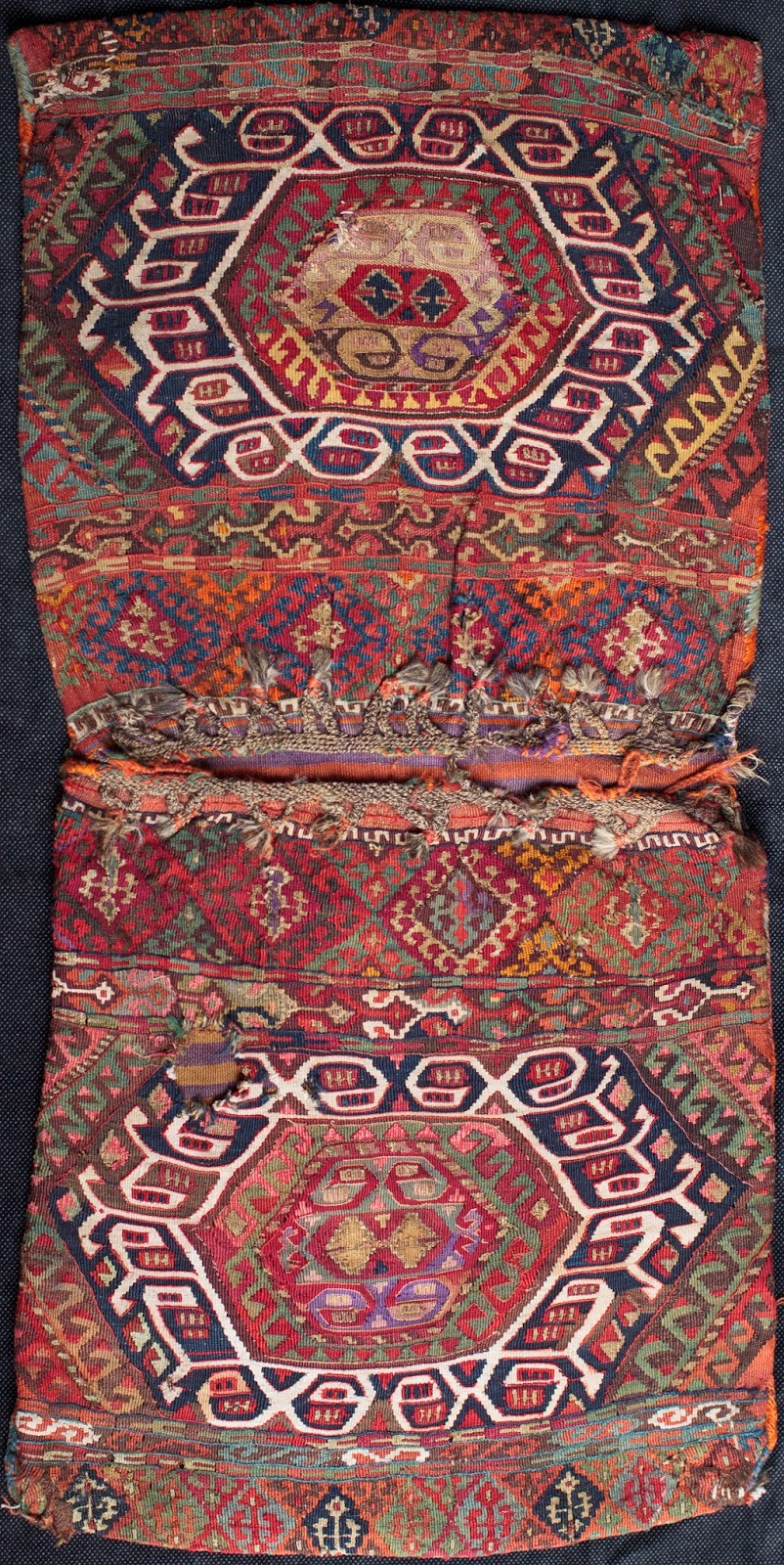 A rare antique heybe saddle bag from Sinan in east Anatolia with great natural dyes. It comes from a village now covered by a dam!

As anyone who has taken an interest in Anatolian weavings will know, these weavings are becoming increasingly hard to find, with most good pieces already in the hands of collectors. The fact that the nomadic culture in which they were produced is almost entirely consigned to history in Anatolia, makes them something to be especially cherished. New kilims and rugs are being produced in Turkey, but pieces like those in the photos abive, woven from hand-spun wool from sheep, goats (and camels) often reared by the yoruk nomad families themselves, using dyes produced from plants and minerals in a tradition going back to ancient times, are something entirely different.

The weavings I am particularly drawn to are those that express more than beautiful pattern-making but retain a vibrant ‘living’ quality; where the motifs, sometimes including archetypal magical symbols, are not only aesthetically pleasing but also reflect the true spirit of an ancient culture inherited through countless generations of weavers. The magical symbols and motifs woven into such kilims and weavings are also the real living expression of the desire, will and prayer of the individual and the family for the same protection, security, love and prosperity that we also strive for. These creations are the result of truly refined skills in dying, weaving and artistic expression, both inherited and learned, rarely encountered outside Anatolia. They have been treasured by the families that made them and passed on through inheritance and as dowry gifts.

For those who would like to read more, Hali Magazine are offering a free online edition this month. Here is a link to the magazine: http://www.hali.com/download/ 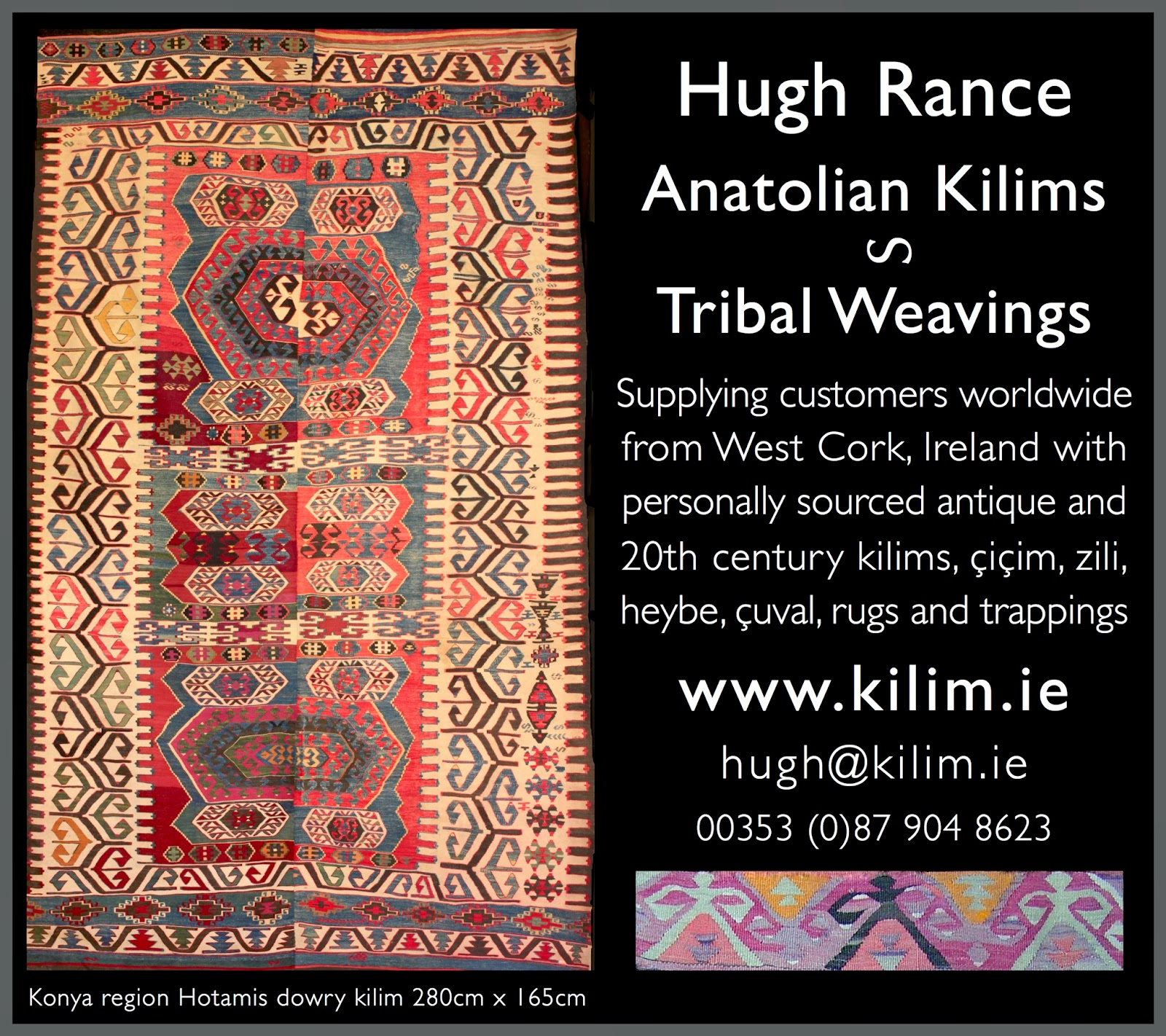