A wrathful manifestation of Avalokiteshvara, bodhisattva of compassion and principal protector of the Gelugpa and Shengpa Kagyu lineages of Tibetan Buddhism, Mahakala Shadbhuja is the ‘Swift-Acting Lord of Pristine Awareness with Six Hands’ in Tibetan mGon-po phyag drug-pa, མགོན་པོ།.

The finely detailed thangka is painted in the ‘nag thang’ style using gold pigment on a black background. This technique is principally used to portray the fierce deities in the Tibetan Buddhist canon. Its effect is to convey the dynamic energy of the illusory appearance of form over an inner core of emptiness; the fearless state of lack of ego and complete unselfishness to which one aspires in the Buddhist practice and experience of complete unconditioned awareness.

On the back of the thangka is the dedicatory mantra oṃ āḥ hūṃ and there is a good explanation of it HERE. In short, oṃ (or aum) represents the body and essence of form, āḥ speech and the essence of sound, and hūṃ represents thoughts and emotions and the essence of mind. The repeated recitation of the mantra is a meditation practice for purifying these physical, energetic and psychological realms.

The thangka was painted in the 20th century and is 124cm x 88cm including a 5cm black border.

For those who are interested, I have begun explaining the different objects held by Mahakala and describing the different figures appearing in the thangka; Vajradhara, bodhisattvas, yogis/ madsiddhas, bardo beings and devi. 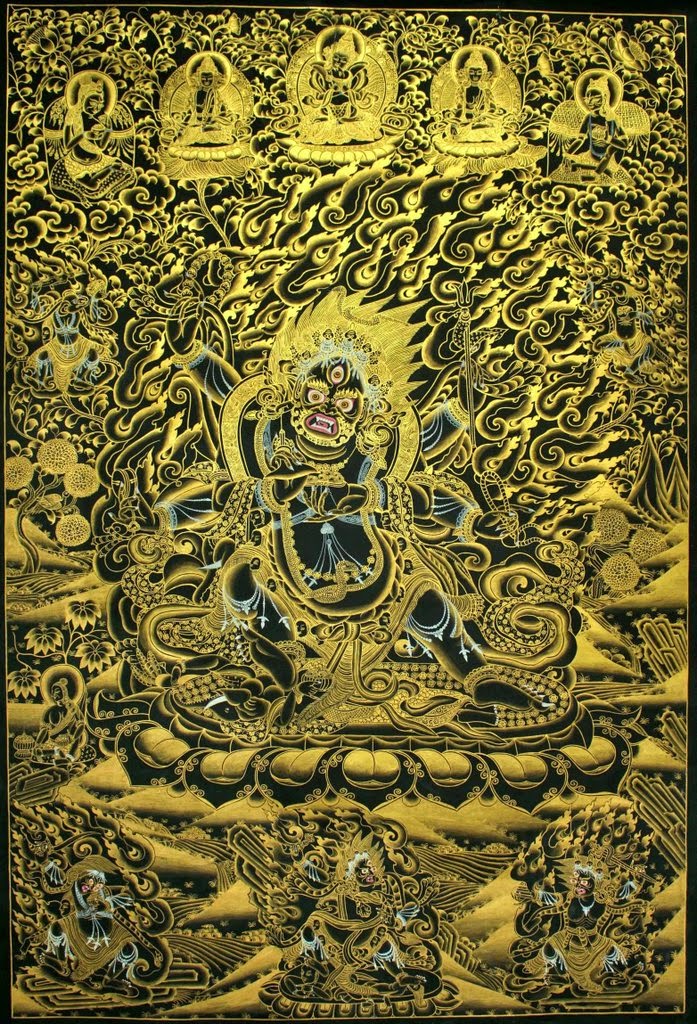 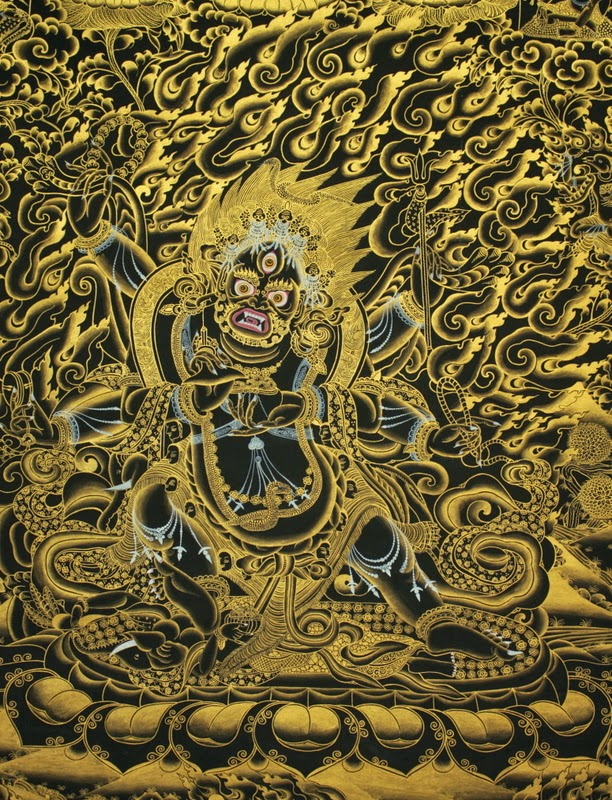 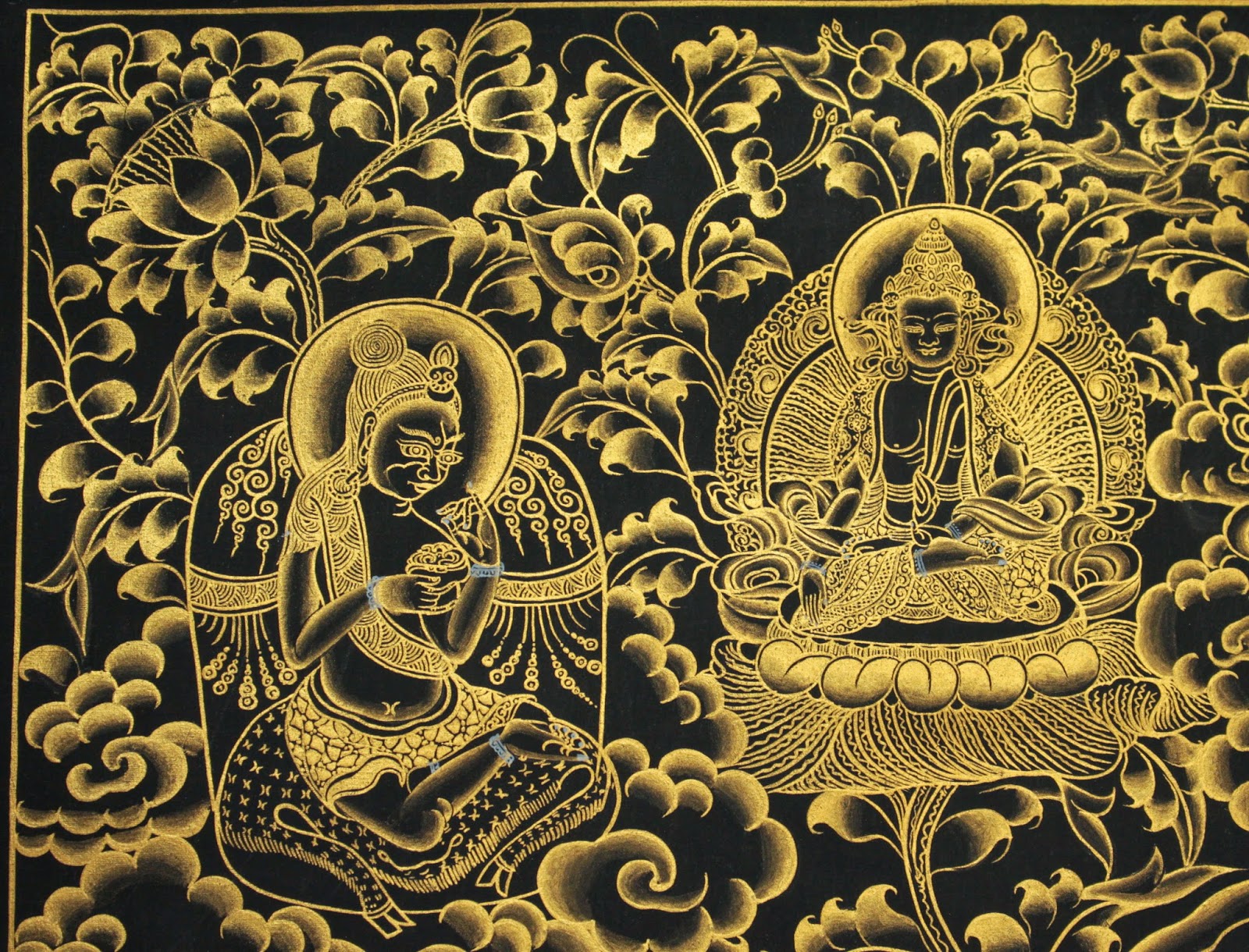 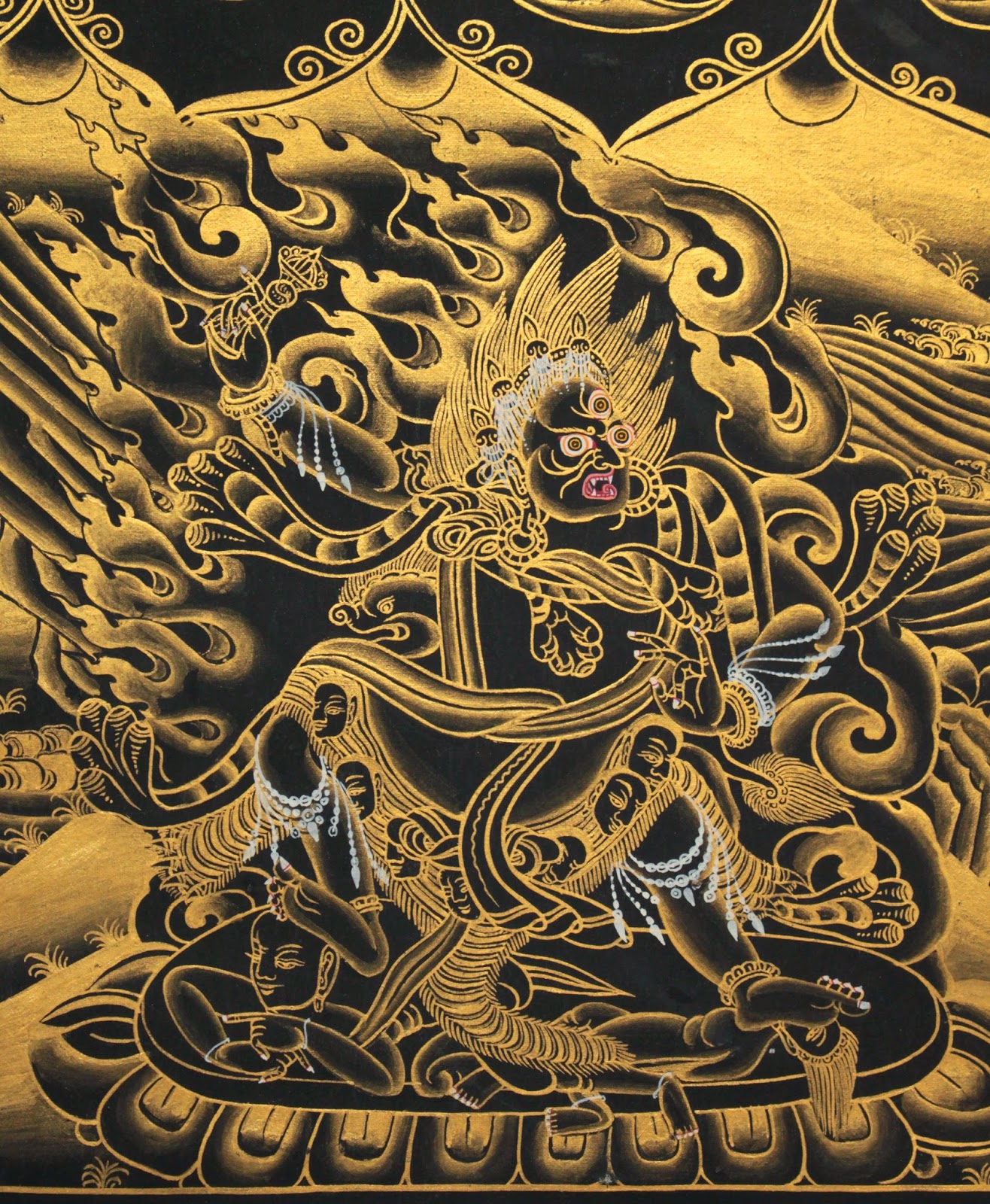 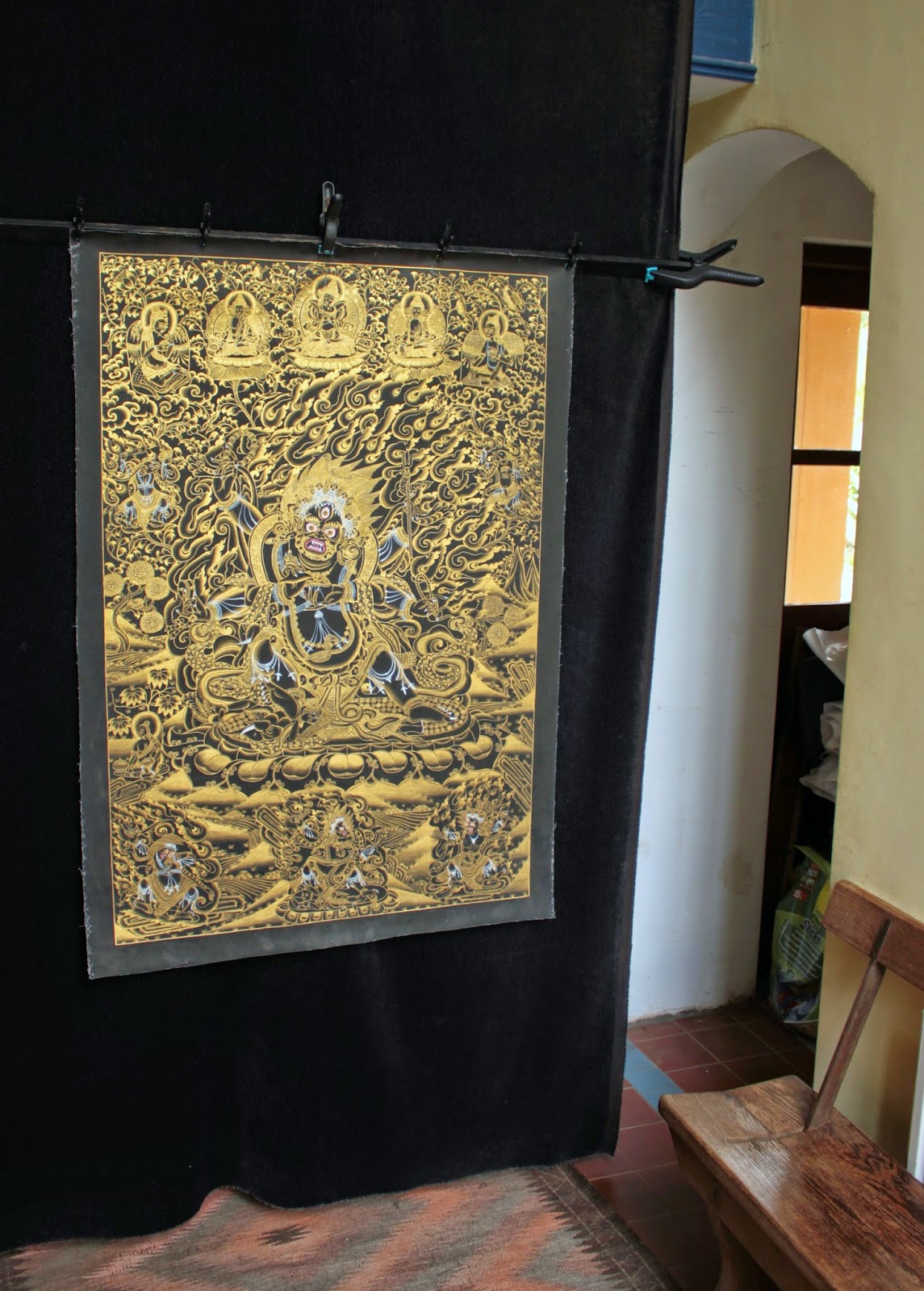 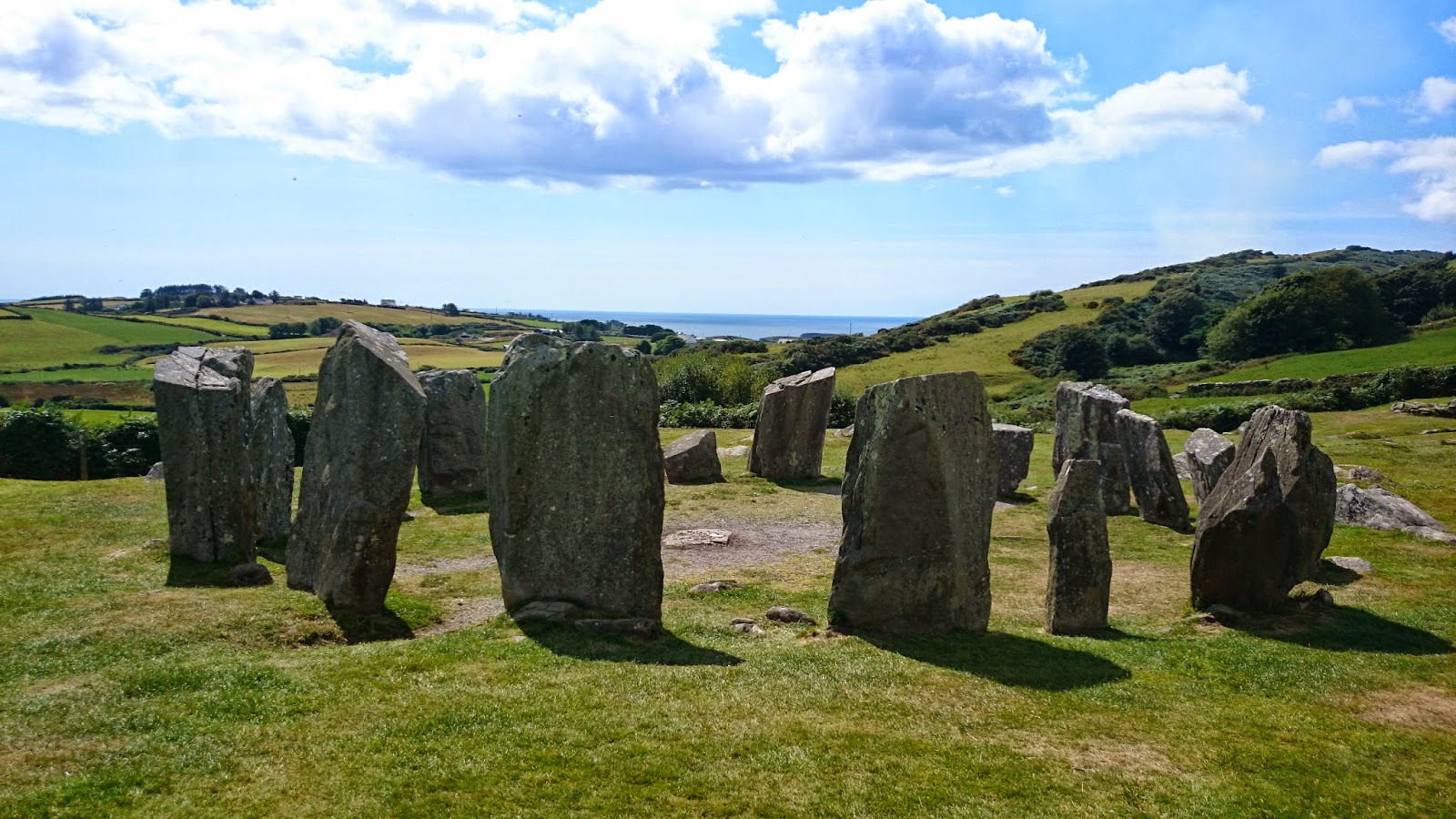 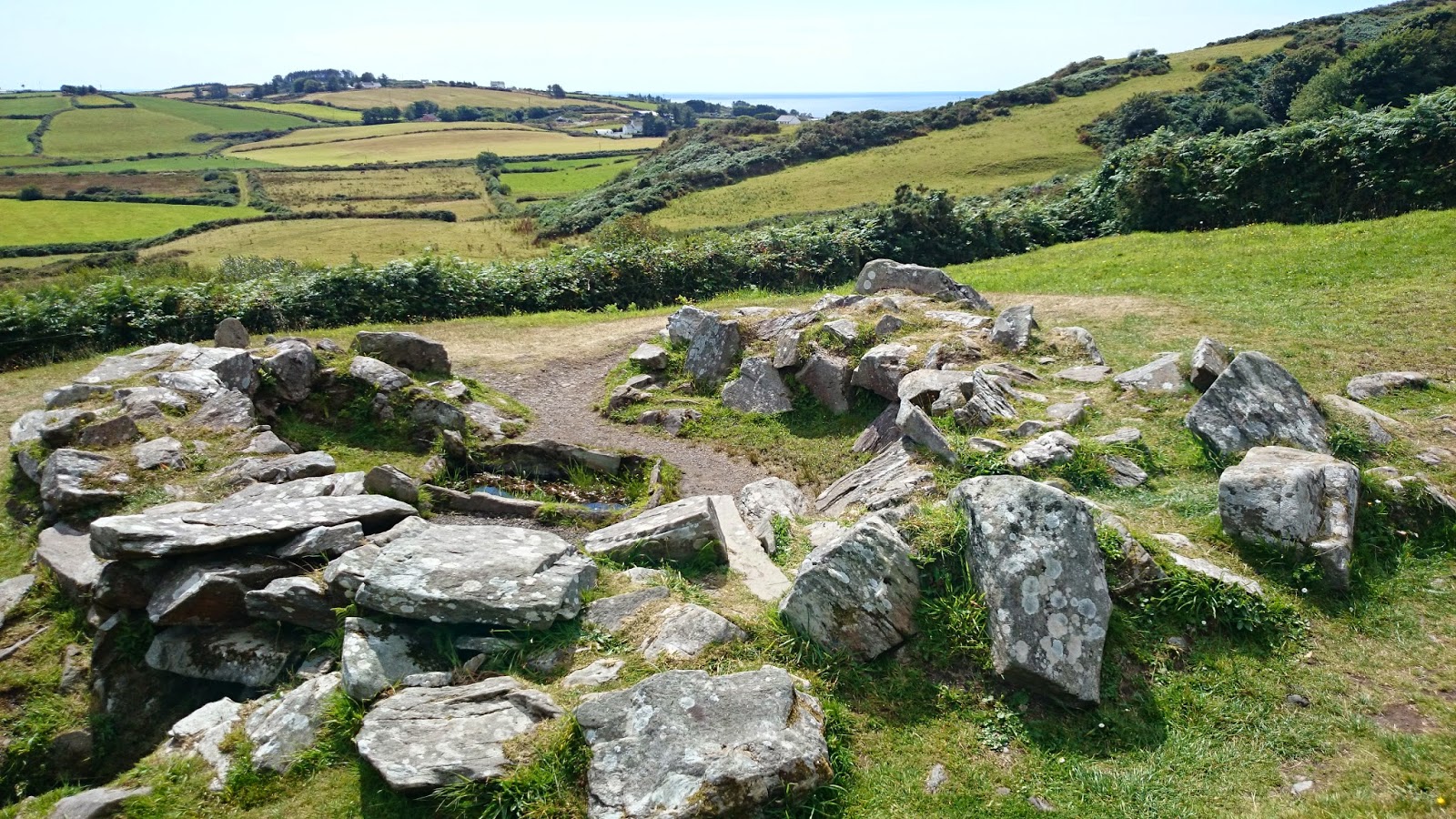 Ok, so what is possible connections are there with textiles and this ancient Bronze Age communal well, water trough and fireplace (Fulacht Fiadh) next to an earlier stone circle at Drombeg in West Cork, Ireland near where I live?

The site was excavated in 1957 and experiments showed that the water in the trough could be brought to a boil in 18 minutes by immersing hot stones heated in the fire. There are different interpretations for the function of Fulacht Fiadhs which include; a communal cooking place, perhaps for special festivals/ceremonies, for instance at the Winter Solstice to which the stone circle is aligned; for ritual bathing (the water trough is rather small but there is a stone hut next to it that could well have been used for the Celtic equivalent of the Native American sweat lodge) or; for dyeing wool for woven textiles. Besides the famous woad dye (Isatis tinctoria), first found in the Neolithic, a number of dyes were produced in the bronze age times from local flowers, seaweed and other plants and minerals. 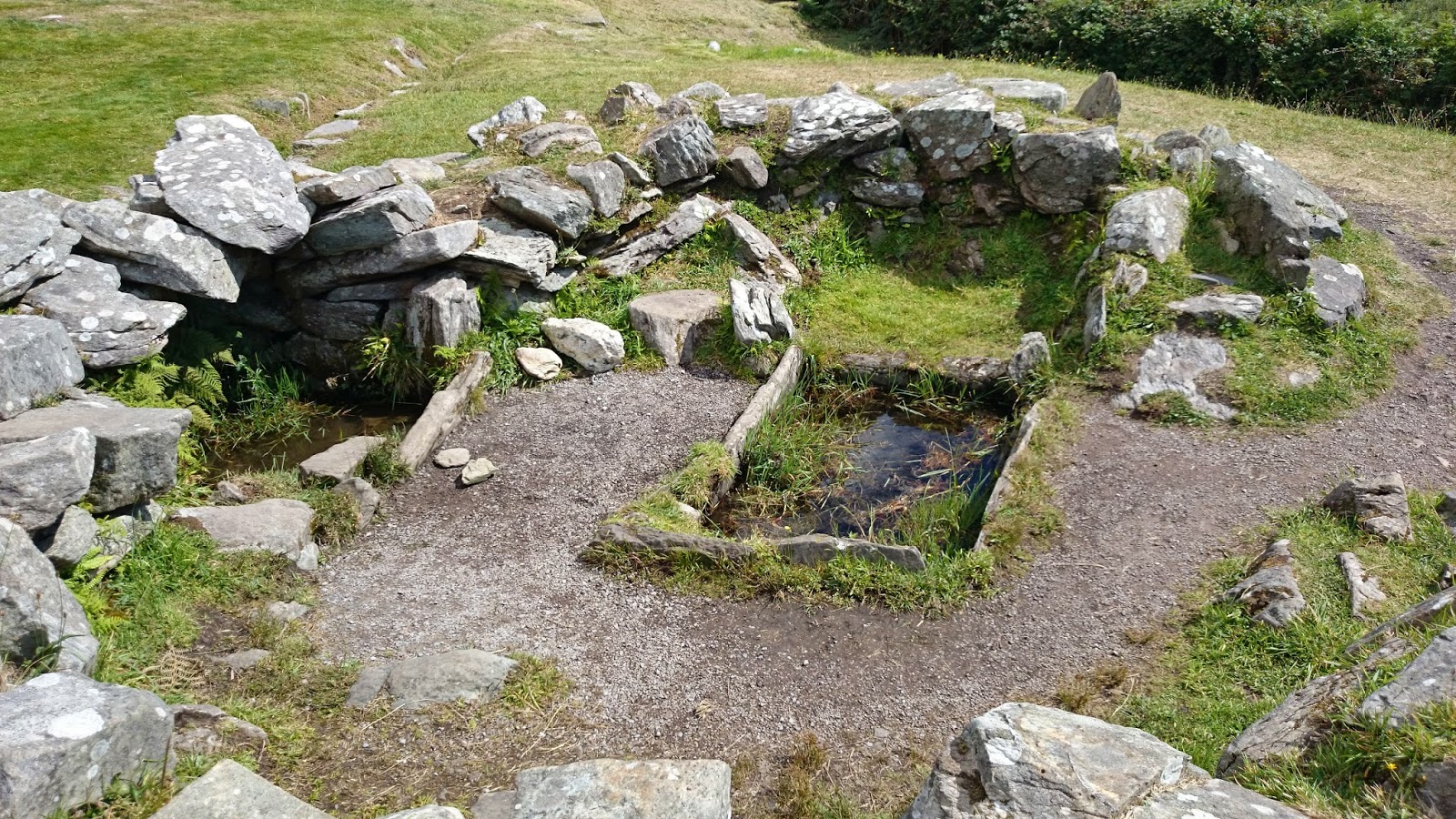 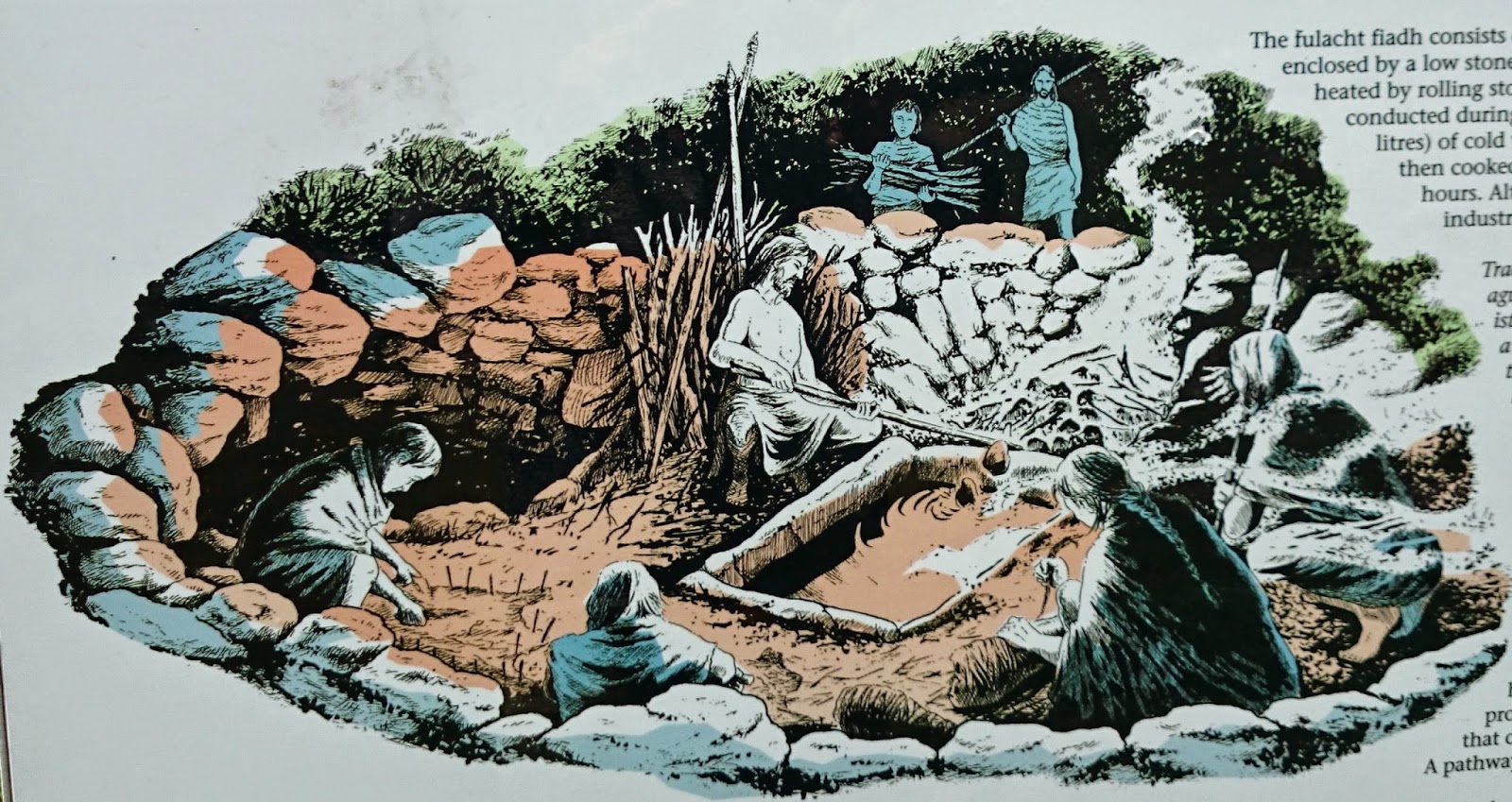 The following extract from an article on natural dye ingredients on the James Hutton Institute website makes reference to possible connections between textiles found in bronze age burials in Xinjiang, China and the Celtic tradition of weaving plaids. https://pastmists.wordpress.com/tag/sinkiang/ 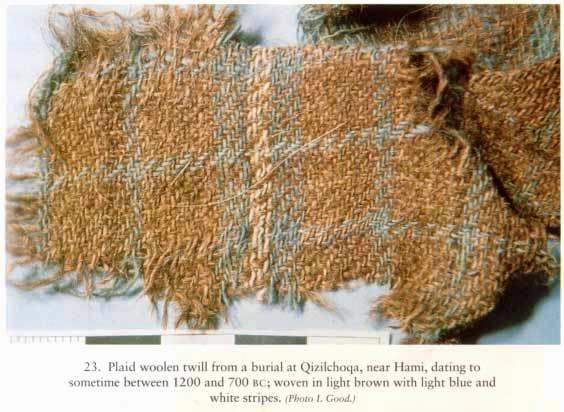 
Never think either that all the people of past ages wore drab, dull clothes - the natural brown, grey and buff colours of hide, fibre and wool. Not much of clothing survives the passage of time, but the mummified corpses from the Qizilchoqa graves in Xinjiang, China, due to the highly dessicated environment they have lain in for around 3000 years, were found dressed in clothing of astonishing colour and style (Mallory & Mair). The weave and pattern of that Bronze Age cloth are said to be similar to those found in the cloths of Iron Age Celtic people of central and western Europe and even to the modern plaids and tartans of Scotland (Barber). The hypothesis has been proposed of a direct line of transmission from the originators of the Bronze Age twills to modern tartans.’ http://livingfield.hutton.ac.uk/science/5000years/plants/dyes 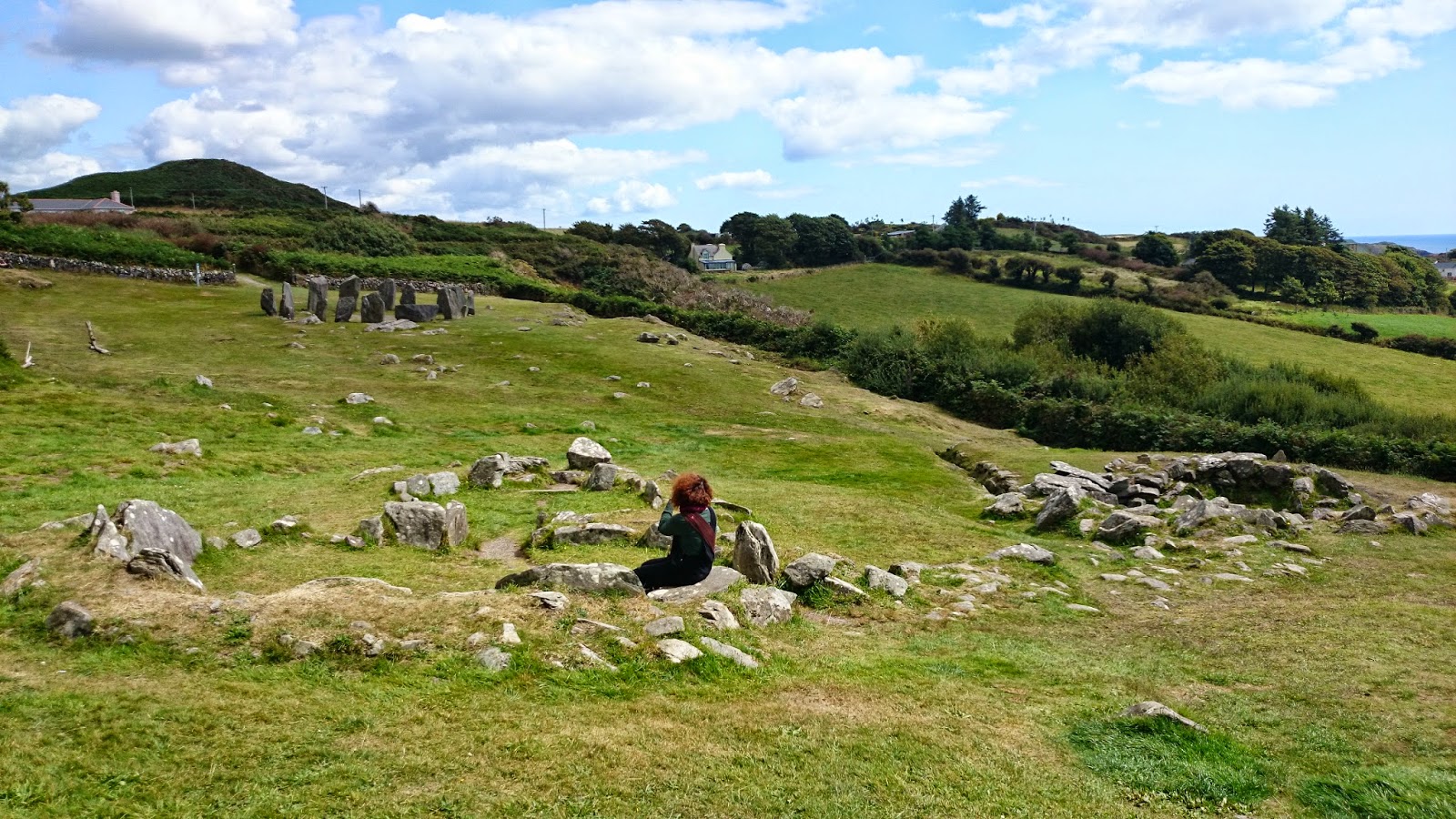 To see and read about the kilims and hand woven woven textiles I have collected visit my website www.kilim.ie 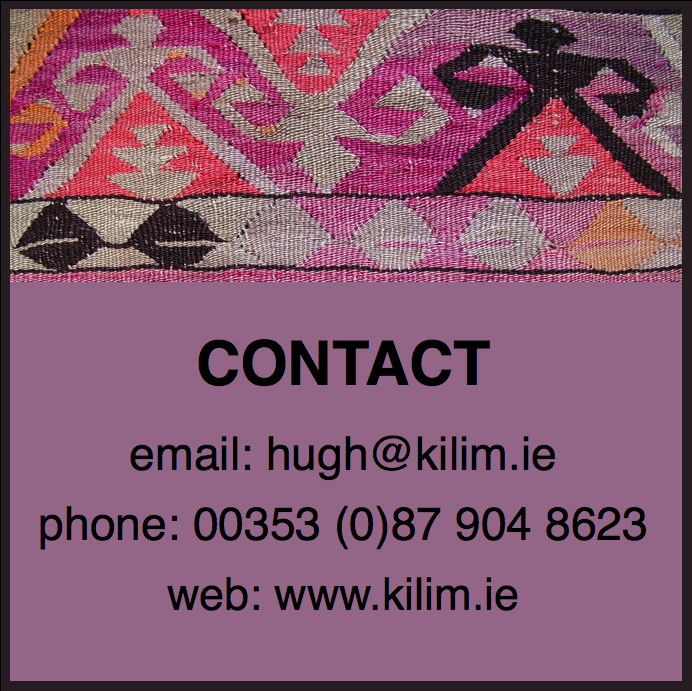 These ceramics were acquired in the early 1980s and were formerly in the collection of a retired archaeologist, who had worked in the Middle East and later settled in southern Spain.


The ceramics demonstrate a variety of decoration techniques of the period, including applied slip with an overglaze and ‘sgraffito’ technique, where the clay or slip is incised to produce a decoration which is then glazed over (see the last bowl). The same technique is found in medieval tiles of the period, both western and Islamic. The bowls include boteh and flower decorations characteristic of Islamic southern Spain of the period. They are all about 33 cm in diameter, which I assume was a standard size for such pieces and I believe date from between the 14th and 16th centuries. 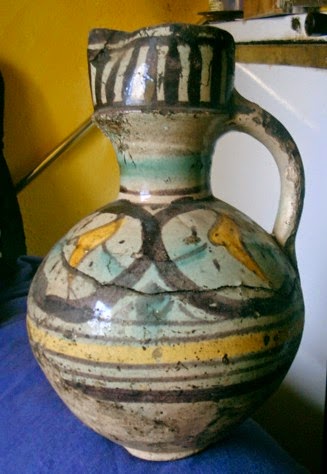 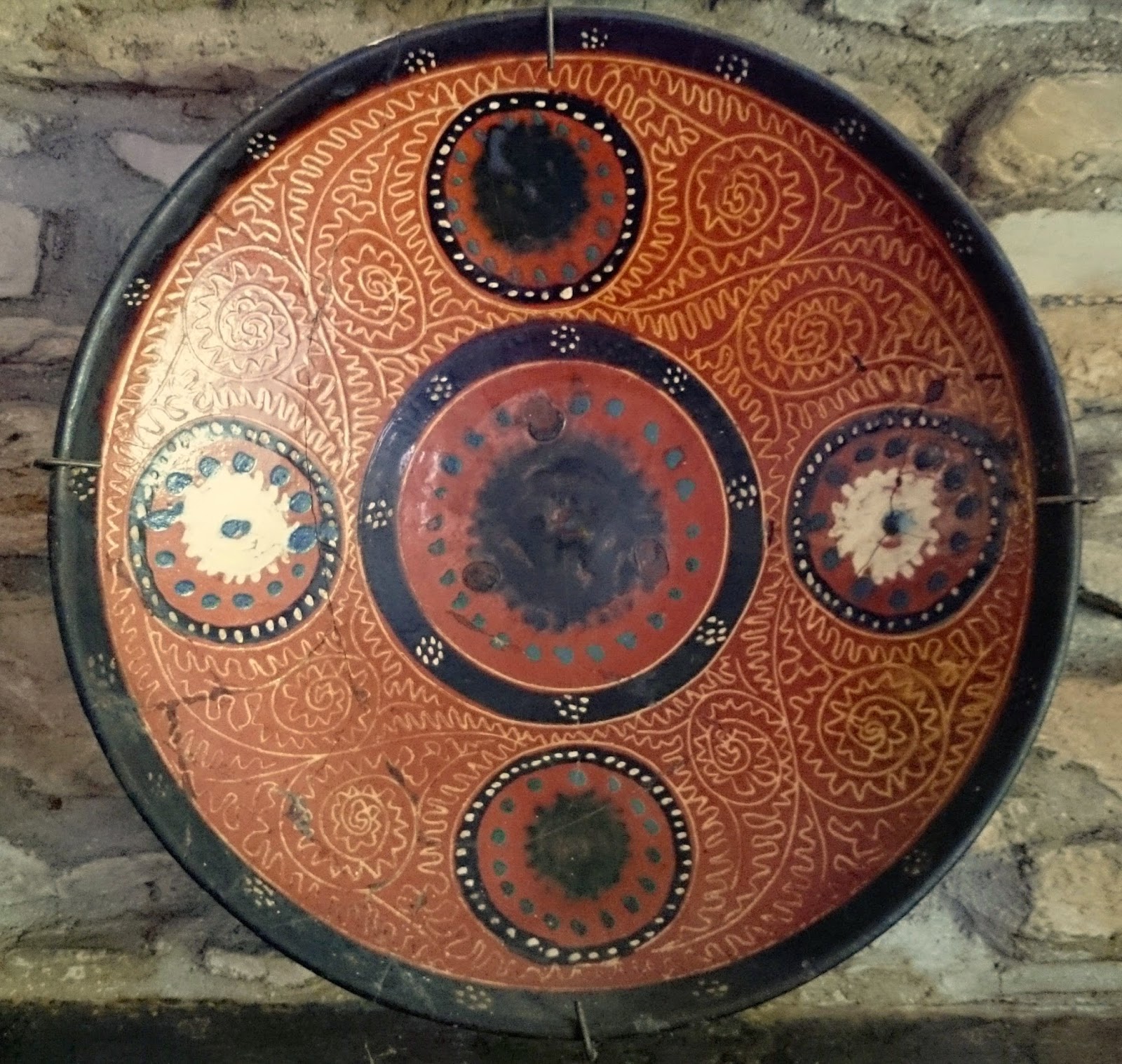 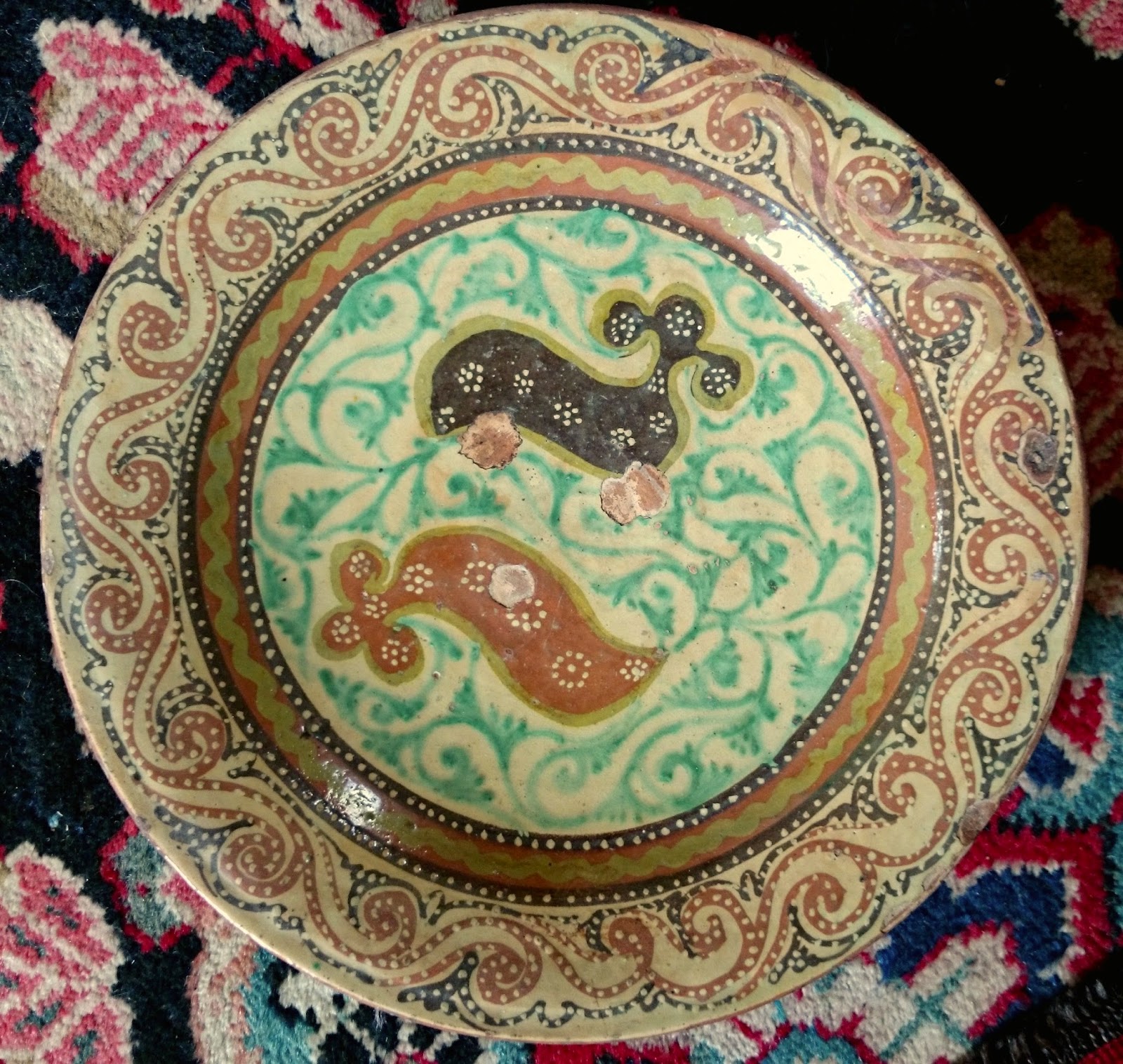 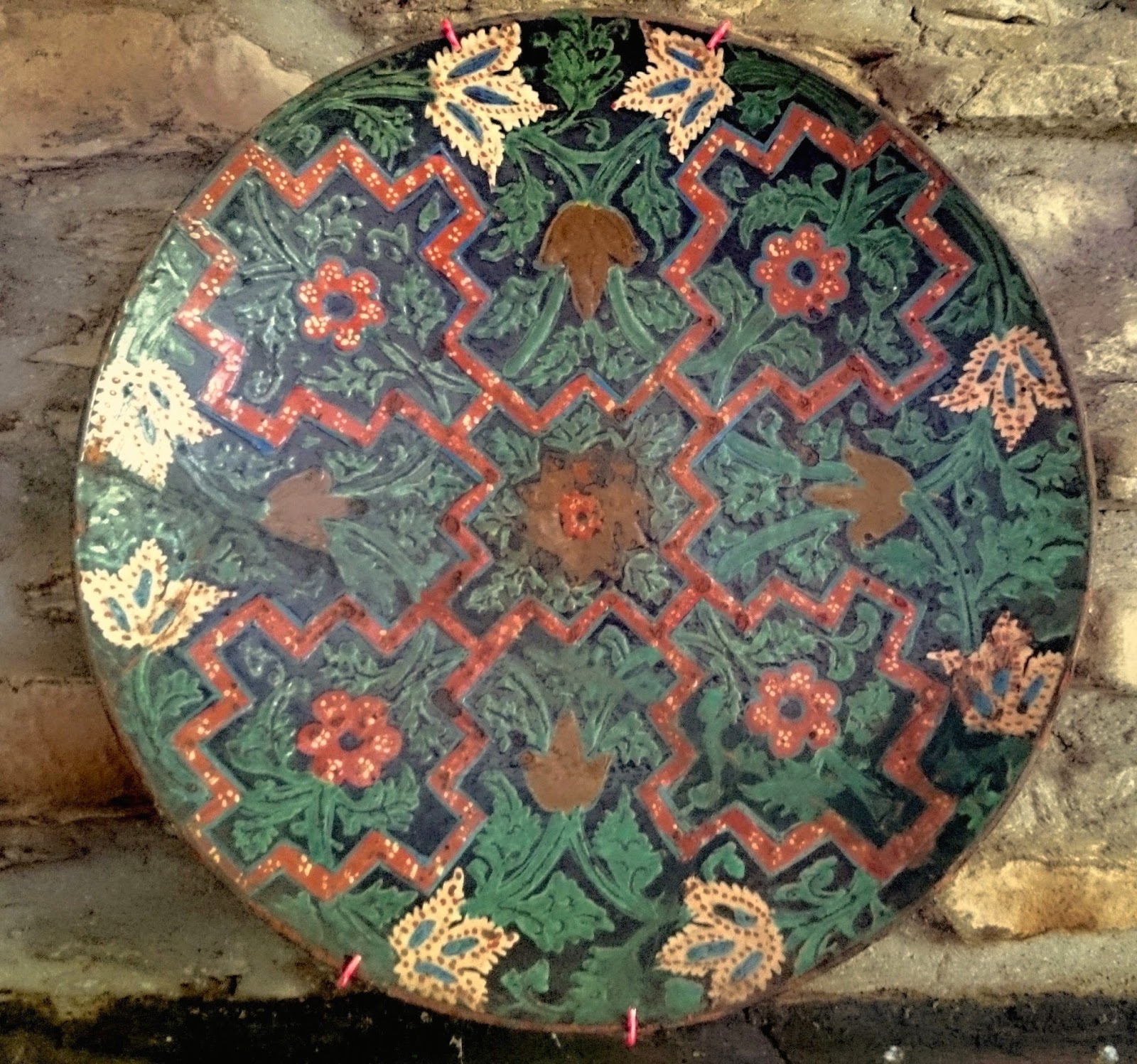 This stunning Ottoman man’s silk shawl came from The Lower House, Wickham, Hampshire and belonged to Major General Sir Charles H. Powell, KCB. The fine silk fabric called ‘kutnu’ in Turkish from which the shawl is made, was woven in Gaziantep in south east Turkey near the Syrian border. This technique and style of silk weaving was introduced to Turkey from Aleppo in Syria in the 1600s but today, there remains only one last workshop producing kutnu silk. The shawl is woven in a fine silk weft of golden yellow, red, blue, emerald green and white. The substantial double twisted silk tassels provide the ends of shawl with weight when worn.

During the Victorian era Powell was a captain in the Gurka Regiment of the Indian Army. He became a general in the British army at the turn of the century and was based in Dublin with Lord Carson in the early 1900s. The shawl is from his estate and is mentioned in an inventory made of his property in 1922 prior to his deployment as ambassador for the Red Cross in Russia in the same year.

The oil portrait shown below of Powell was painted by Ella Powell to celebrate his Colonelcy of the 1st King George’s Own Gurkha Rifles (The Malun Regiment) from 1916–1943 and was donated to the Gurkha Museum in 2003.

The Ottoman kutnu silk shawl which is 290cm long (including 9cm tassels) and 79cm wide, is estimated to have been woven between 1880 and 1910 and is in remarkably good condition for its age. 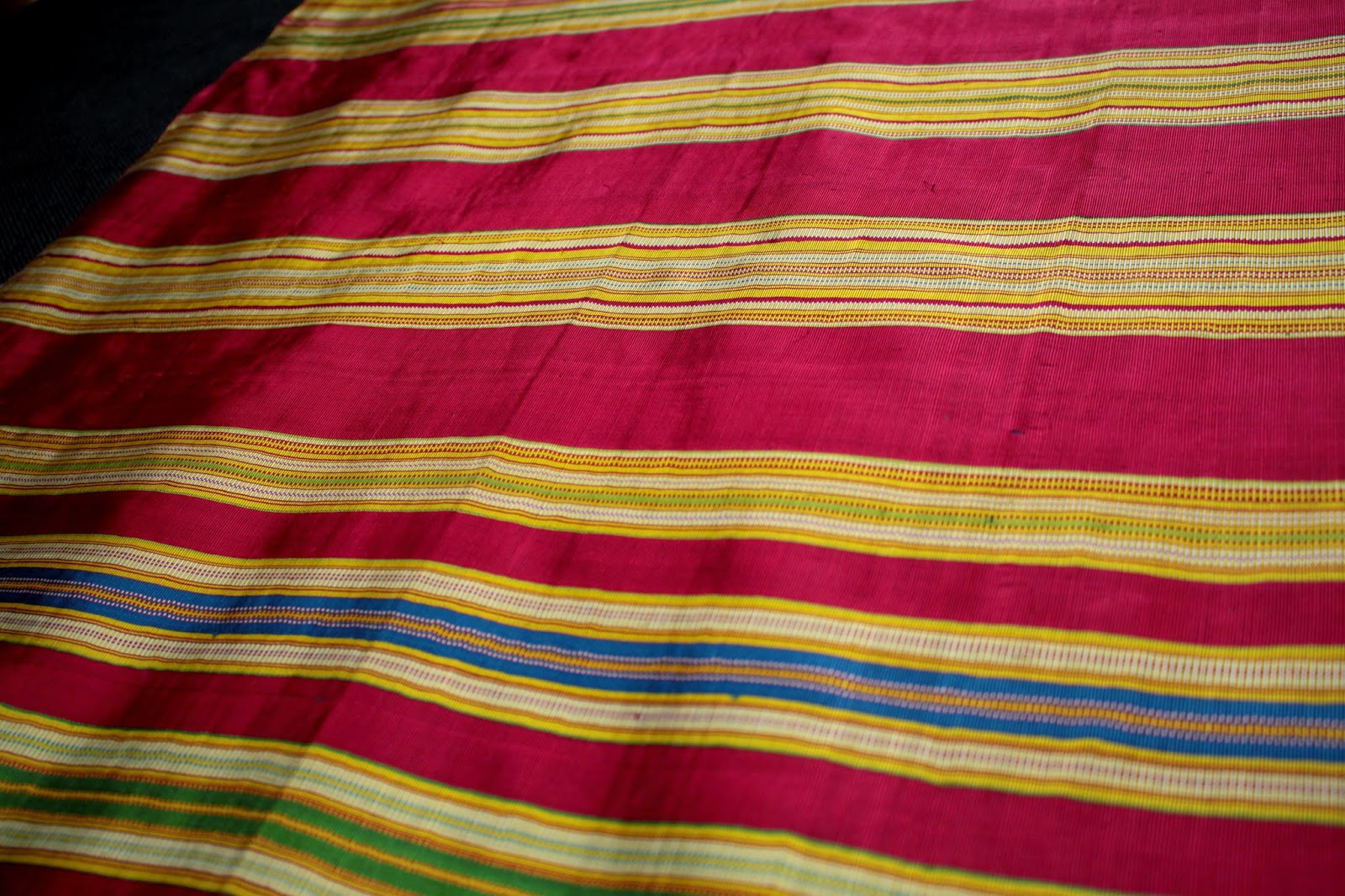 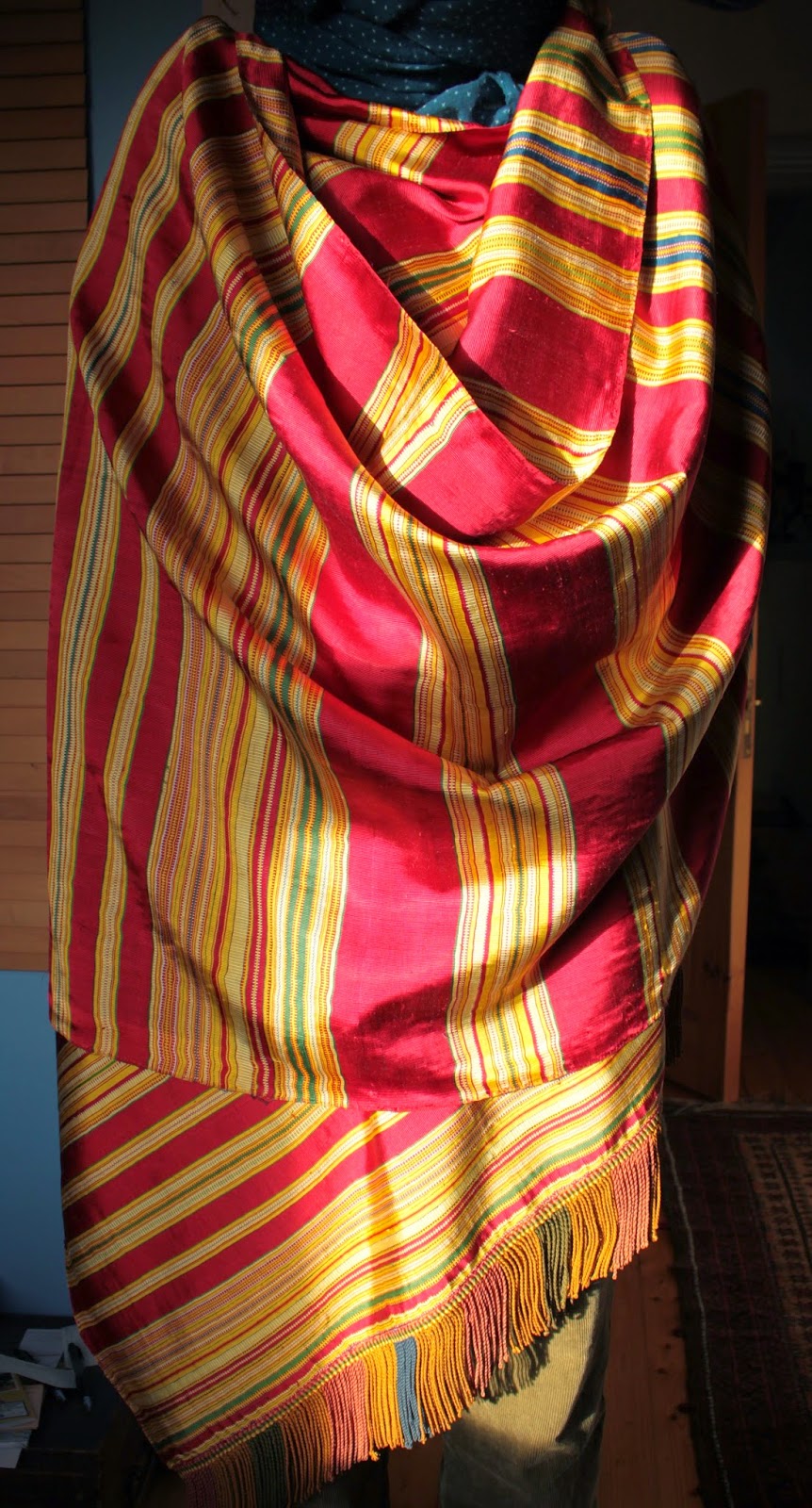 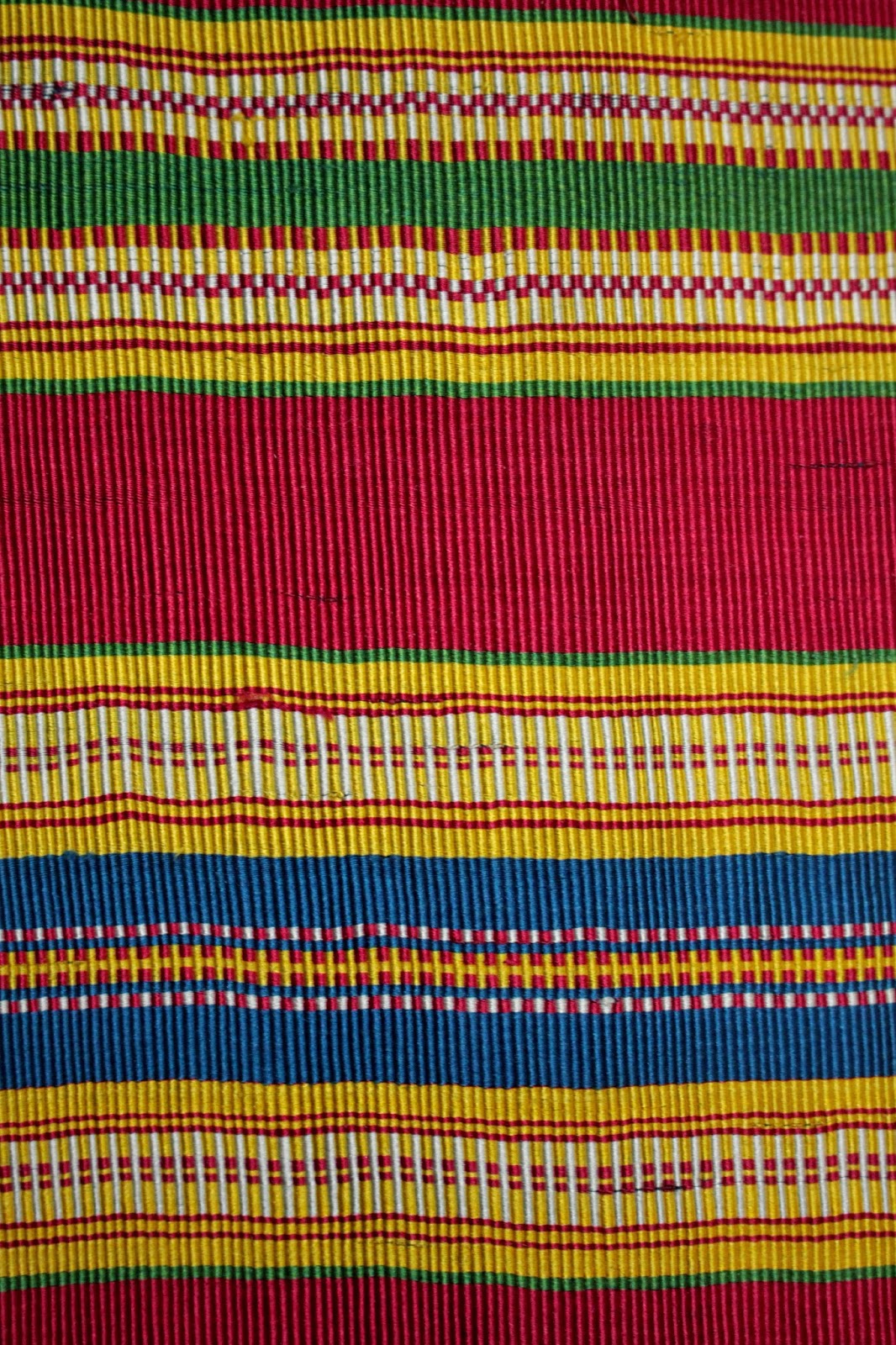 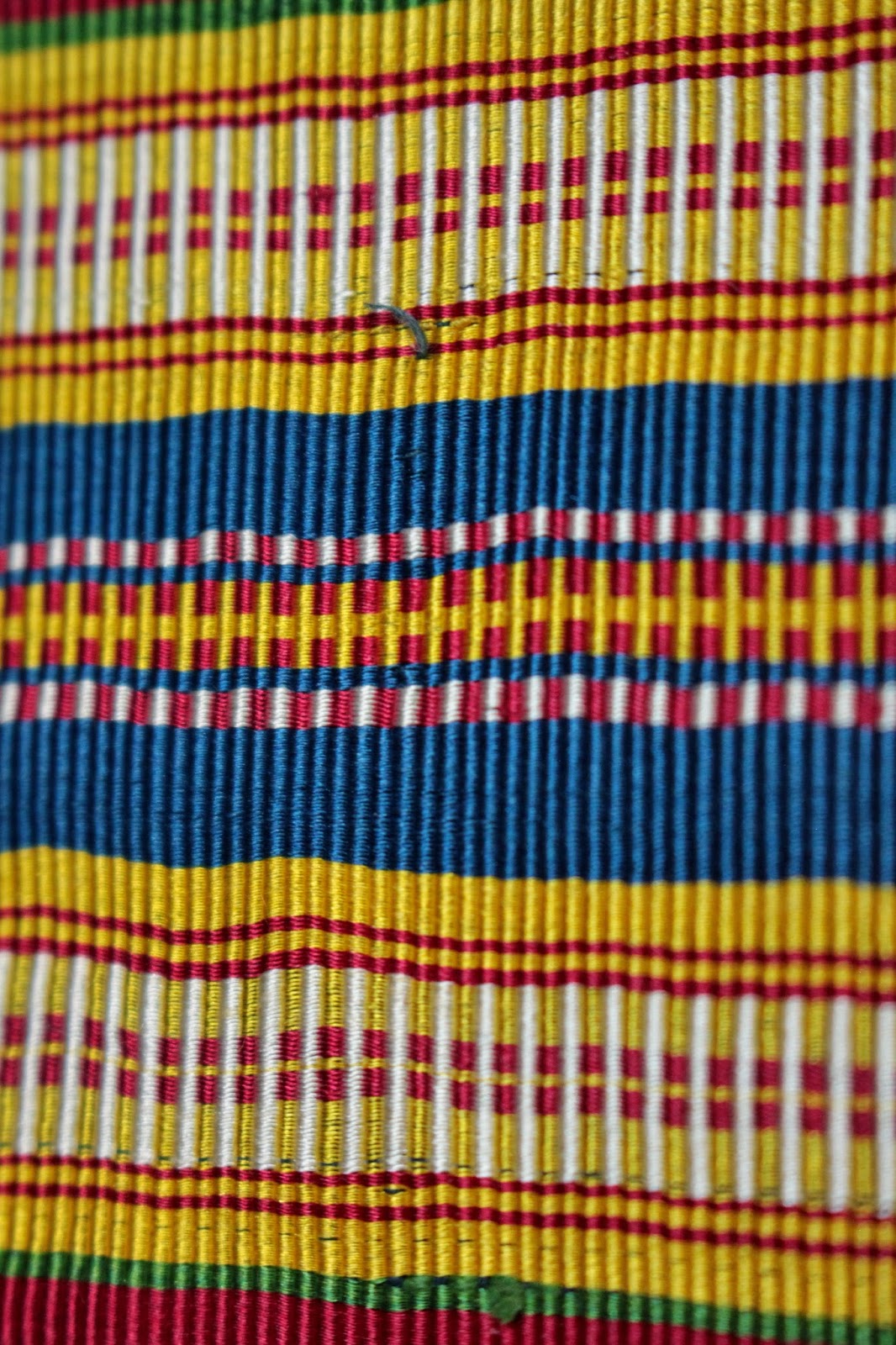 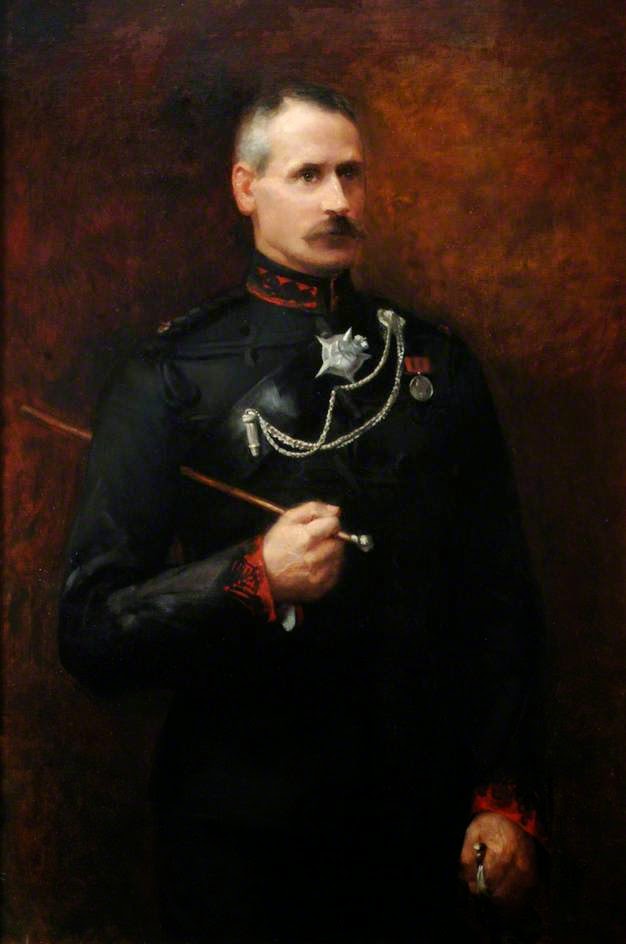 From a village in the Cuzco region of Peru woven from alpaca wool using natural dyes including cochineal used for the reds and the pinks (by adding salt to the dye). The poncho has an unusual woven collar and an added woven band around the entire edge and is 166cm x 154cm in size. This is the finest example of such a poncho I came across when travelling in Peru and Bolivia. 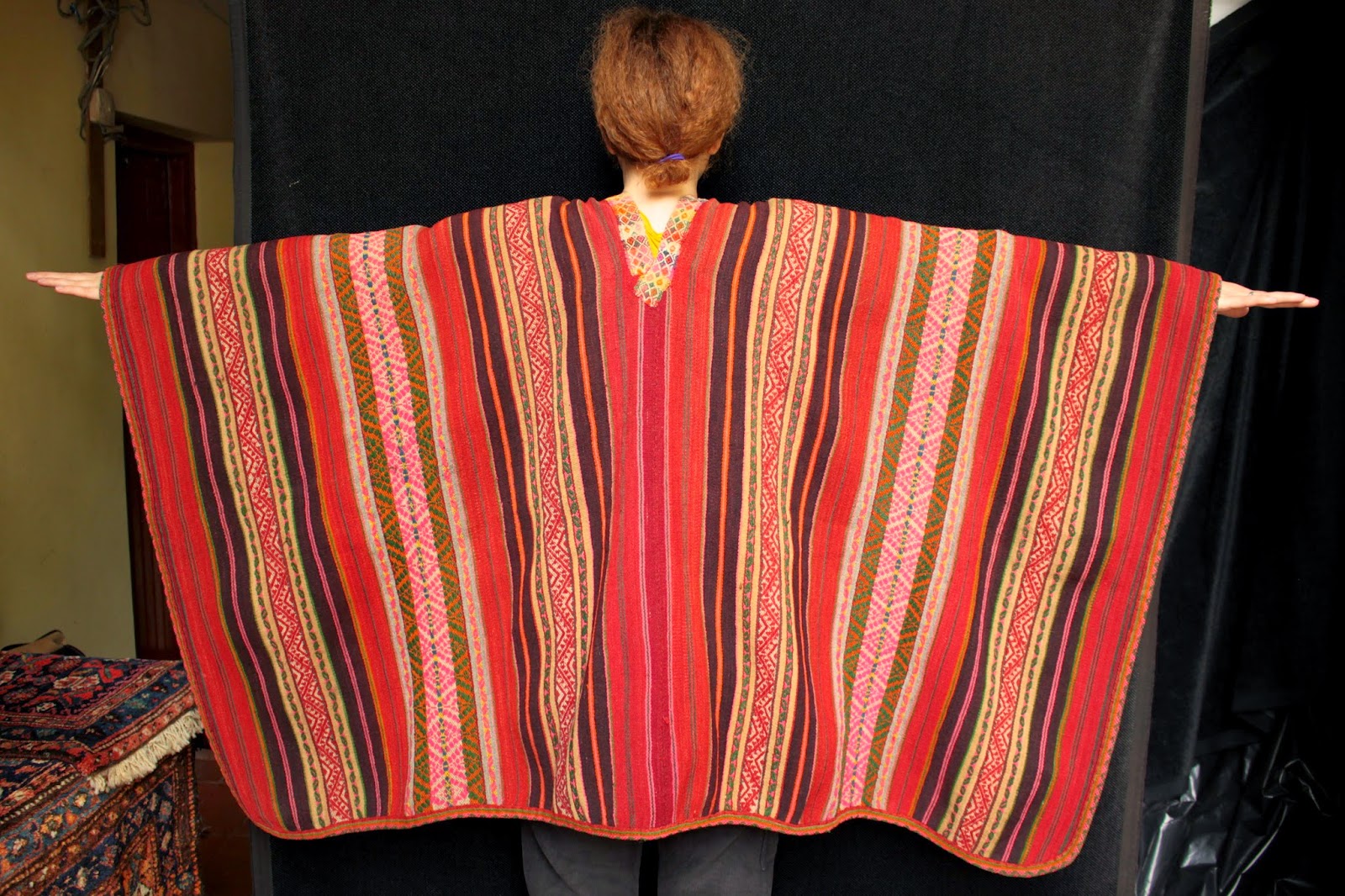 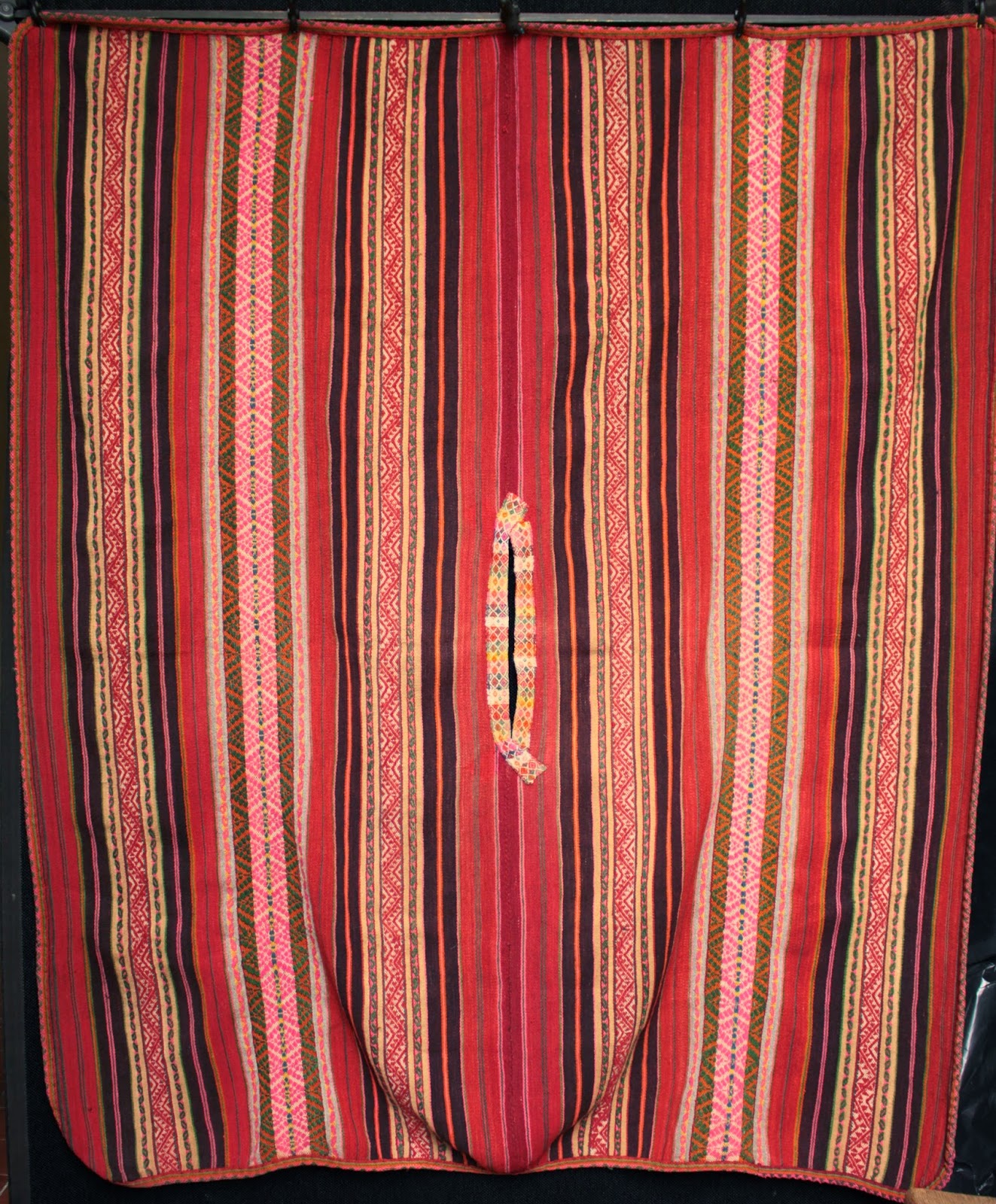 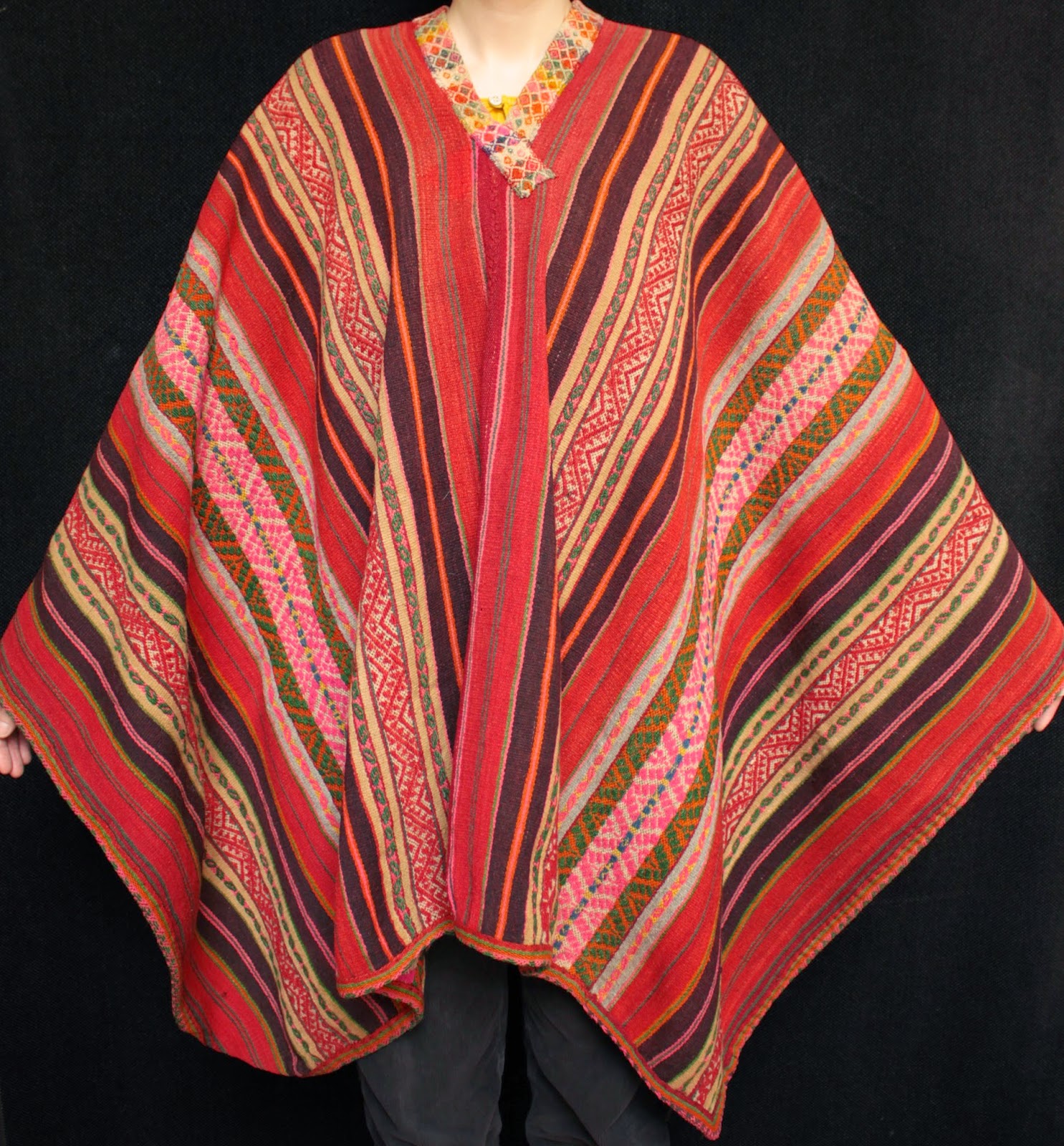 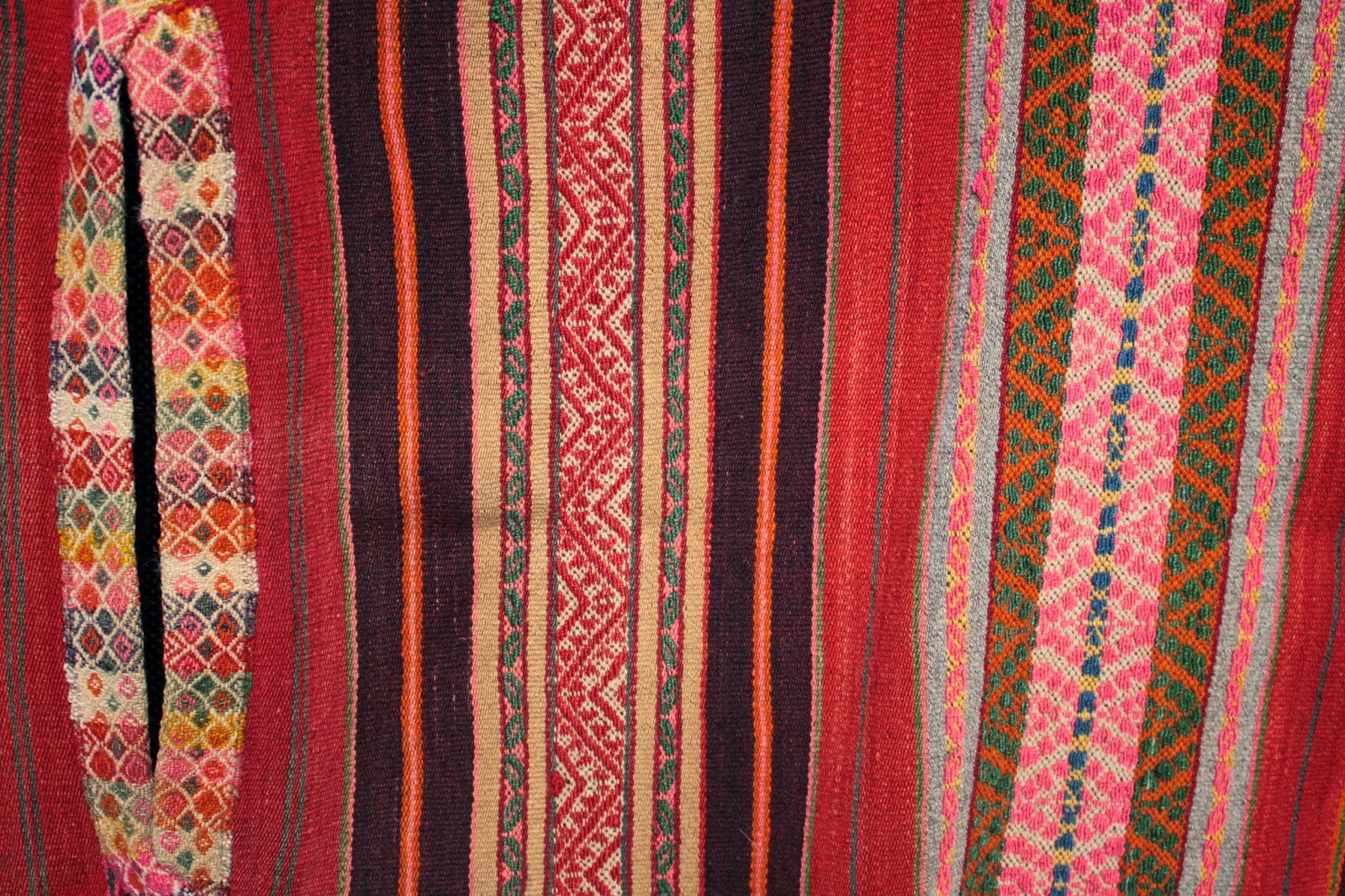 Made from fine silk probably woven in Aleppo. This type of fabric was also woven in Anatolia, mainly in Gaziantep, after is came from Syria in the 1600s. Made between about 1880 and 1920, the textile pattern is called 'Mejidiyeh qutnu' from the Arabic word qutni, which describes the fine silk and cotton weft. This luxurious robe is in very good condition for its age and is 130cm long and 142cm across from cuff to cuff.

For more details and photos, see www.kilim.ie or click on www.tribal-art.org 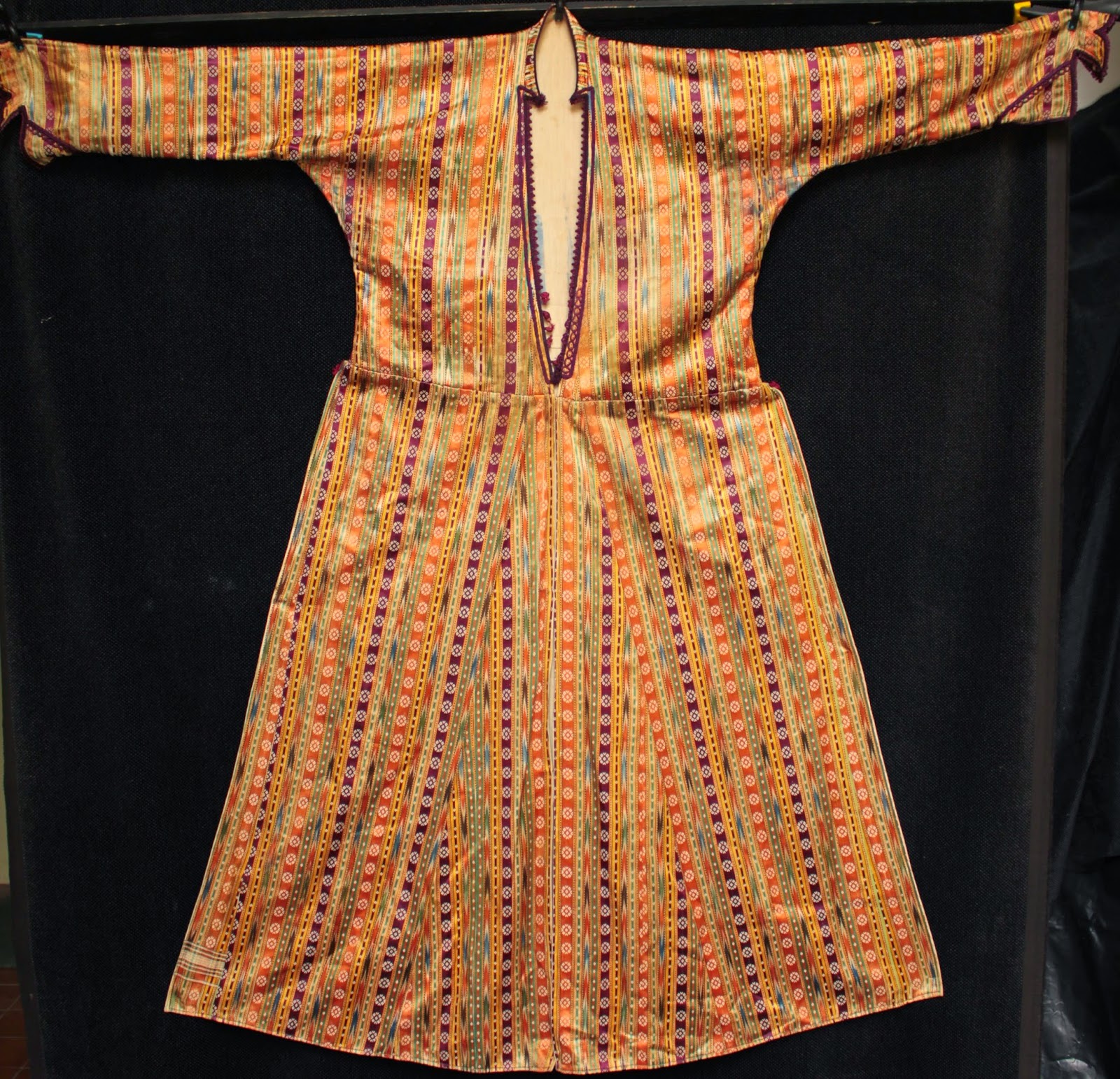 Hali Magazine, the famous rug dealers’ and collectors’ journal, is offering its Summer 2014 issue in a free download. You can get it by clicking the text below the Hali logo:

I have an ad on page 142 which illustrates an unusual Anatolian Konya region, Hotamis dowry kilim you can see more photos of by clicking on text below the ad or going to www.kilim.ie 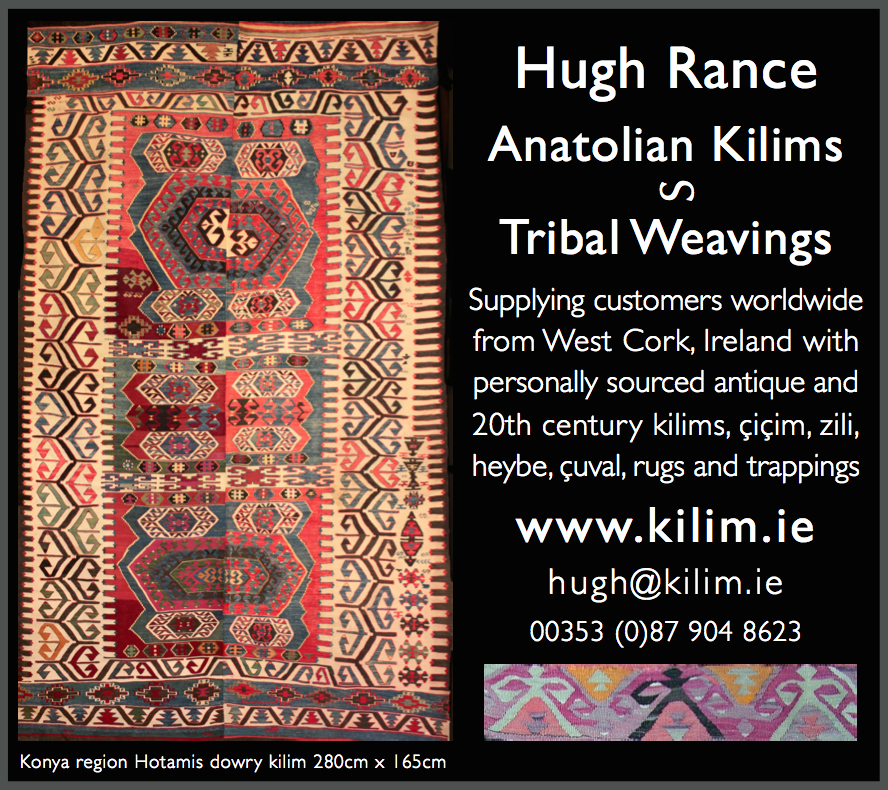 Anatolian Konya Region Dowry Kilim from Hotamis
Posted by Unknown at 08:10 No comments: